According to County Business Patterns, in 2010, US establishments in NAICS 323111 had an annual payroll of $15.9 billion. Payrolls dipped during and in the aftermath of the Great Recession and then rose, at least on a current dollar basis, over the latter half of the decade before dropping in 2019, finishing out the decade at $16.3 billion in 2019. However adjusting for inflation, payrolls declined by -12% over the course of the decade. In macro news: inflation is starting to slow ever so slightly. 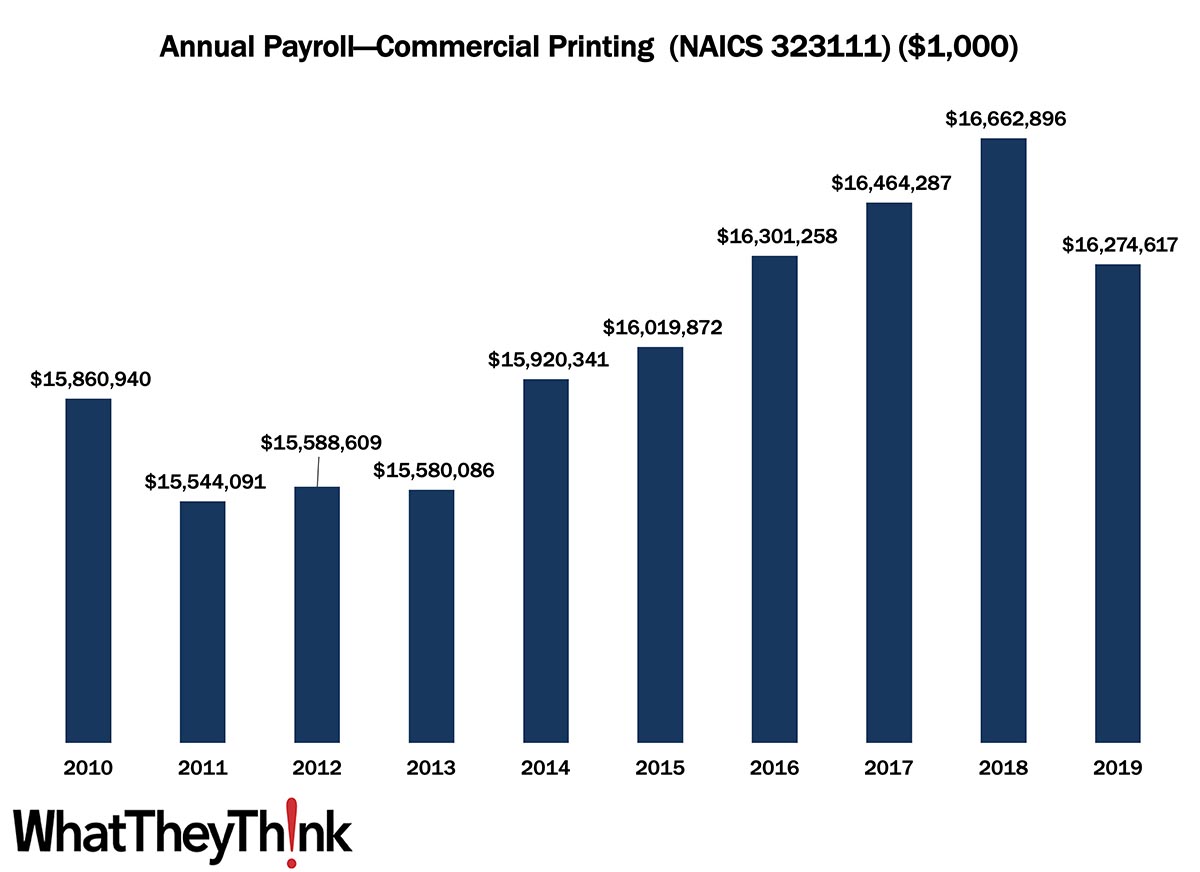 Last time, we looked at NAICS 32311 (Printing) and this week, we drill a bit deeper to look at NAICS 323111 (Commercial Printing [except Screen and Books]). In 2010, US commercial printing establishments had an annual payroll of $15.9 billion. Payrolls dipped during and in the aftermath of the Great Recession, but rose, at least on a current dollar basis, over the latter half of the decade before taking a pre-pandemic tumble in 2019, coming in at $16.3 billion in 2019. Note that County Business Patterns payroll data are reported in current, not inflation-adjusted, dollars. If we were to adjust for inflation, 2010 payroll would be equivalent to $18.5 billion in 2019, so we are essentially looking at an overall decline of -12% in payroll over the course of the decade. Now, this is not just due to inflation—employment and establishments had also declined by 16% and 23%, respectively, over that same time period.

In this space two weeks ago, we had remarked that, at least in the time period we are looking at here, the decline in industry employment was due to industry consolidation, retirement and workers otherwise exiting the industry without a ready pool of next-generation employees waiting to be hired, and, to a lesser extent, automation, although automation is increasingly being looked to as a solution to employees who have already been self-displaced—unlike in other industries where automation tends to displace workers.

On Wednesday, the Bureau of Labor Statistics (BLS) released the latest inflation figures:

The Consumer Price Index for All Urban Consumers (CPI-U) increased 0.3 percent in April on a seasonally adjusted basis after rising 1.2 percent in March, the U.S. Bureau of Labor Statistics reported today. Over the last 12 months, the all items index increased 8.3 percent before seasonal adjustment.

Increases in the indexes for shelter, food, airline fares, and new vehicles were the largest contributors to the seasonally adjusted all items increase. The food index rose 0.9 percent over the month as the food at home index rose 1.0 percent. The energy index declined in April after rising in recent months. The index for gasoline fell 6.1 percent over the month, offsetting increases in the indexes for natural gas and electricity.

If you back out food and energy, CPI rose 0.6%. Note that core inflation grew to an annualized rate of 7.0% compared to 4.0% in the previous month, thanks to a large decrease in energy prices, which is reflected in overall in CPI but not in core CPI. Generally, this is good news and suggests—suggests—that our inflation woes are going to ease over the next few months. The Producer Price Index (PPI) also looks to be leveling off, up “only” 0.5% in April, compared to 1.6% in March and 1.1% in February.

The Grid has a very good article explaining why the causes of our inflationary problems are largely beyond the reach of the usual tools the Federal Reserve has to keep inflation in check. (The eternal challenge is raising interest rates enough to curb inflation without driving up unemployment and/or plunging us into a recession, as was the case in 1981–82.) As for what the government itself can do…well, not that much. The last time the government tried to impose price controls, after the outbreak of the Korean War, it did not go well.

But as with any economic indicator since 2020, who the heck knows what May inflation will look like. But this week’s data was about what economists had expected, so we’ll stay optimistic.