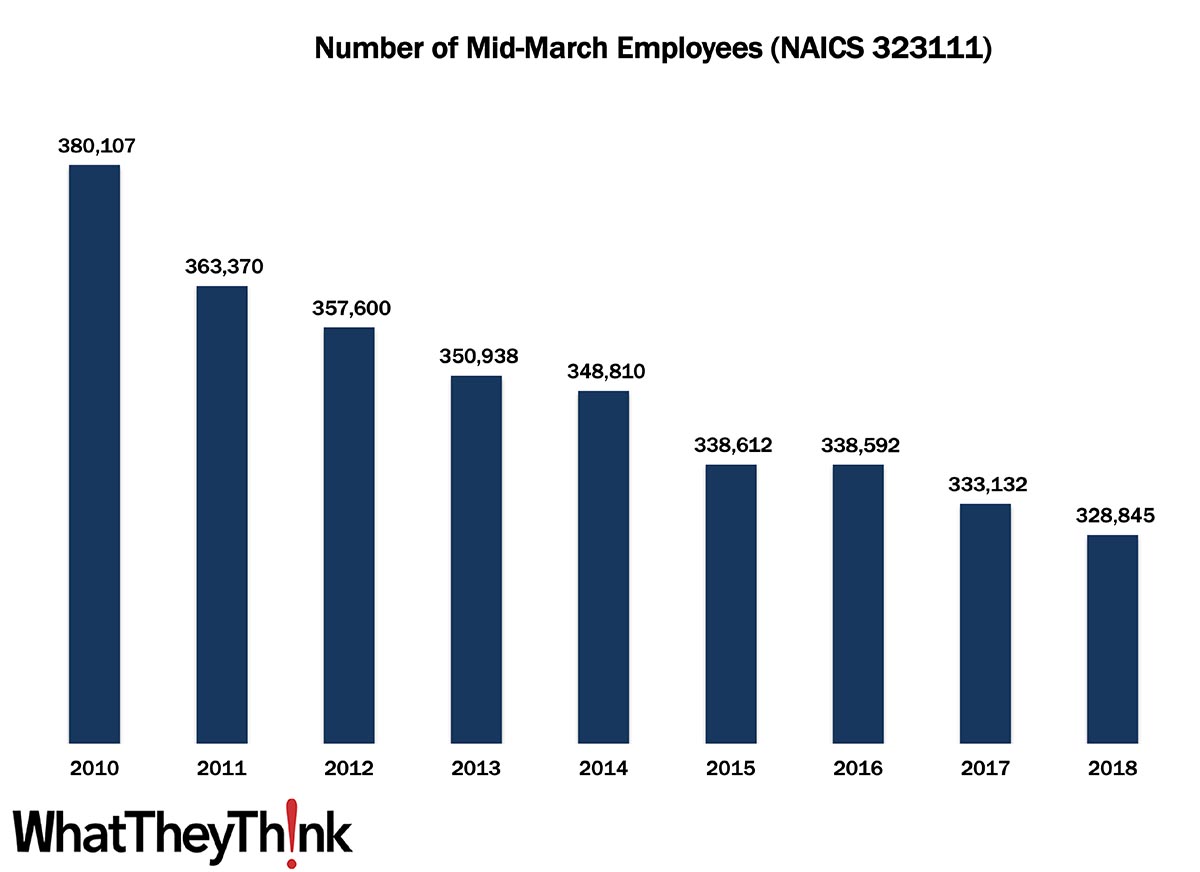 Two weeks ago, we began a new data series in our Friday Data Slice’n’Dice based on data from County Business Patterns: graphic arts employees. We had started with NAICS 323 (Printing and related support activities), and this week, we drill down into NAICS 323111 (Commercial Printing Except Screen and Books). In 2010, there were 380,107 employees working in US establishments in NAICS 323111 and by 2018, that number had declined -13.5% to 328,845.

In this space two weeks ago, we had remarked that, at least in the time period we are looking at here, the decline in industry employment was due to industry consolidation, retirement and workers otherwise exiting the industry without a ready pool of next-generation employees waiting to be hired, and, to a lesser extent, automation, although automation is increasingly being looked to as a solution to employees who have already been self-displaced—unlike in other industries where automation tends to displace workers.

If one good thing has come out of the pandemic, it’s that inflation has been soft. This week, the BLS released its January Consumer Price Index (CPI) data:

The Consumer Price Index for All Urban Consumers (CPI-U) increased 0.3 percent in January on a seasonally adjusted basis, the U.S. Bureau of Labor Statistics reported today. Over the last 12 months, the all items index increased 1.4 percent before seasonal adjustment.

The gasoline index continued to increase, rising 7.4 percent in January and accounting for most of the seasonally adjusted increase in the all items index. Although the indexes for electricity and natural gas declined, the energy index rose 3.5 percent over the month. The food index rose slightly in January, increasing 0.1 percent as an advance in the index for food away from home more than offset a decline in the index for food at home. The index for all items less food and energy was unchanged in January. The indexes for apparel, medical care, shelter, and motor vehicle insurance all increased over the month. The indexes for recreation, used cars and trucks, airline fares, and new vehicles all declined in January.

So at least there’s one thing we don’t have to worry about!