Fiber Computing: The Next Industrial Revolution

The mission of Advanced Functional Fabrics of America (AFFOA) is to enable a manufacturing-based revolution—what we could call Industry 5.0—with the transformation of traditional fibers, yarns, and textiles into highly sophisticated integrated and networked devices and systems. In a recent conversation with Senior Editor Cary Sherburne, the organization’s Chief Marketing Officer, Eric Spackey, explains.

A member of the National Network of Manufacturing Innovation (NMMI) Institutes, the Advanced Functional Fabrics of America(AFFOA) is a non-profit institute headquartered on the campus of Massachusetts Institute of Technology (MIT). Its CEO, Dr. Yoel Fink, is also a professor and former Director of the Research Laboratory of Electronics at MIT. Eric Spackey, its Chief Marketing Officer, is also the President & CEO of Bluewater Defense, a military apparel manufacturer located in Puerto Rico. They join other members of the leadership team in driving the development of fiber devices, one of the technologies the Obama Administration believed would be critical to the future of American fiber and textile manufacturing. AFFOA is partially funded by the U.S. Government, but has also raised almost $340 million in direct investment and cost-sharing contributions to ensure its work is carried on beyond the start-up stage. 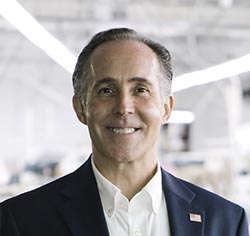 “Most people don’t think of MIT as an institution involved with textiles,” Spackey said. “They did have a significant fiber and textile program at one time, given the proximity to powerhouse textile cities, such as Lowell and Lawrence, but during the 1960s the study of textiles was significantly reduced as the focus shifted towards bioengineering. Today, it is being revived in the form of new discoveries at MIT enabling the creation of ‘fiber devices.’ What this means is that at the fiber or thread scale, we can incorporate devices – you might even say the ability to process information like a computer—encased in the fiber and draw it as you would a normal fiber, putting it into fabric. This is the next generation of what fabric will look like.”

Spackey categorizes these developments as the next industrial revolution—Industry 5.0. “Textiles basically haven’t changed for millennia,” he said, “and they have always been selected for look and feel, and protection from the environment, but not high-tech functionality.” Spackey, who comes from the telecom industry, sees a convergence happening between communications technology and fabrics. “Now with cloud computing infrastructure,” he explains, “you can think about creating applications off of those textiles. With Dr. Fink at MIT, a fiber research physicist, we realized we could make these fibers the next form of communications.”

As part of the organization’s work, it is helping to establish a number of fabric discovery/prototyping facilities (FDCs), one of which is located in its backyard in Lowell, Mass., which was a textile mill powerhouse back in the day. “It’s kind of cool, you have an old brick mill on the outside, but inside is the future of manufacturing,” Spackey says. “We’re literally revitalizing the textile industry from the inside out.”

Spackey points out that a huge part of the organization’s mission is education of industry and the public about the possibilities this next industrial revolution presents. “The FDCs will play a key role here,” he says. “Between the FDCs and MIT, we have hosted well-known technology executives who will help us in driving this revolution. Even there, education is required. One computing executive asked, ‘But where is the hardware?’ Well, there isn’t any, really. It’s an entire new form of packaging concept for computing. But the question highlights the need for a different way of thinking, even among innovative technology leaders.”

Moore’s Law, of course, was named after Gordon Moore, co-founder of Fairchild Semiconductor and Intel, who published a 1965 paper projecting that the number of transistors in a dense integrated circuit would double every year, later revising it to every two years, a projection that has stood the test of time. Sometimes the time period quoted is 18 months, a combination of the effect of more and faster transistors.

“We’ve developed the Moore’s Law of Fiber,” Spackey remarked. “It didn’t exist before, and it is actually happening. We can see the kind of trajectory in capacity and capability, but with a sharper curve because we are so new in the development process that things are happening faster than 18 months. Because this is a new greenfield area of technology, we are seeing close to a doubling of capacity and capability every 90 days.” 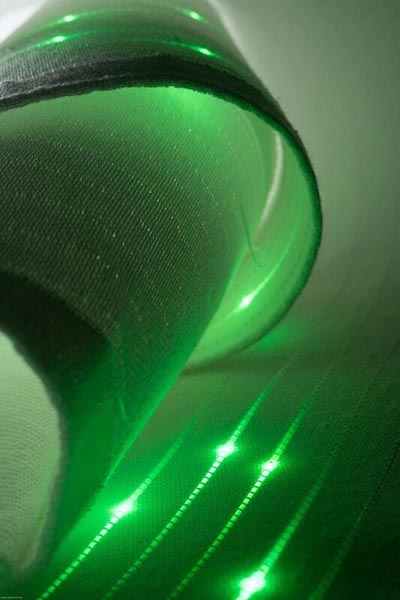 Spackey asks us to think about what it could mean to have all of the fundamentals of a computer inside a piece of thread, and what that can do with whatever devices you might have hanging off of your clothes, a car seat, or other materials. “It’s the next shift, just like mobility,” He says. He draws parallels with what happened in telecom, a revolution he lived through as part of what ultimately became T-Mobile—growing from what was a kernel of an idea to one of the largest mobile phone carriers in the U.S. “I’m seeing the same exact thing happening here as happened in telecom 30 years ago,” he says. “We’re building the ecosystem that will enable us to go from idea to product with fiber computing, not in just one sector or group, but in all industries—healthcare, architectural fabrics, apparel, the auto industry, with different uses for each one. You can see it happening, and it is up to our imaginations to think about where and how the technology can be used.”

Spackey is quick to explain that this does not mean putting wires in fabrics. “The fiber itself is the device,” he explains. “Materials can include photo diodes, transistors and receivers. It is a new form of packaging that will revolutionize the microelectronics industry. This is the biggest change in the electronics industry we will see in my lifetime.”

The Reinvention of Microelectronics

The changes are happening rapidly. In July of this year, DARPA, under its Electronics Resurgence Initiative (ERI), a five-year, upwards of $1.5 billion investment to jumpstart innovation in the electronics industry, announced it has selected research teams from academia and industry to explore the development of flexible architectures capable of using specialized hardware to solve specific computing problems more quickly and efficiently. In March of this year, IBM announced it had developed a 300 x 300 micron computer with the processing power of an 8086 (remember that IBM computer?). That’s the size of a grain of salt. And in June, the University of Michigan announced a 100 x 100 micron computer.

“This changes how you think about a processor and how it is set up,” Spackey continues. “It is no longer a circuit board. We can change the whole concept of what a circuit board looks like. It’s not longer flat like a chip. It can even be square, as long as we can draw it into a fiber. It is encased; it is waterproof, it is flexible. We’ve already proven the concept.”

Spackey cites an early example of LiFi communication using a fiber that can communicate through LED lights, modulating the lights to create bits and bytes of information. “Through the modulation of the LED lights, you can have a fiber, connected to a small control board and ear buds, actually play music or you could walk through a building and experience someone speaking to you. Think about a museum where every light next to a painting would be transmitting information about that painting.”

Changing the Concept of Wearables and Connectivity

The LOOKs technology platform developed by AFFOA does not require batteries; it’s a 24-bit code woven into fabric. That alone is huge. He reports that many tech companies are actively working to figure out how all of this might fit in future product plans.

Spackey also looks forward to a time in the next five years or so where augmented reality glasses will become as common as cell phones are today and where smart garments are common as well. “Think about a jacket,” he says, “that has woven patterns you can’t see with the human eye, but that a QR code reader on your phone or AR glasses can distinguish. You could, for example, turn on the functionality as you are going into a meeting, and the other attendees can see your LinkedIn profile right from your jacket with their AR glasses. Sharing information will be a big part of this future.”

Another development that will speed fiber electronics into common use is 5G cellular. “There are already developments underway for Cellular Vehicle-to-Everything (C-V2X) technologies that will, for example, let your car know you are there before you can even see it, and that will enable your car to connect and see the world around it.”

He also envisions clothing that will be able to help us for protection purposes. “Consider a lone worker in an oil field working on equipment,” he says. “A lot of things could potentially happen, and with smart clothing, the environment will know you are there. Heating and cooling are other areas of interest. There can be fibers that incorporate certain bacteria that can sense sweat. If it occurs, they cause the material to open up the fibers, and then close them when you cool down. It creates new forms of venting. That work is already underway in MIT’s Media Lab.”

Other applications include thermochromatic fibers that can change color, fibers that can release medications or cleansers on demand (self-cleaning clothing!) that are time-released and can recharge themselves.

“In five to 10 years,” Spackey concludes, “I expect fiber computers to be in common use. It will be inherently part of what we wear. Your T-shirt will be functional, will be able to tell you your heart rate, or can call your family or healthcare provider if you are in distress. There will be no reason to carry a cell phone in your pocket. Your eyewear and your clothing will replace mobile devices. Part of the challenge in getting there is that we have to change the way we think. It is important to understand where we are today and how this future can fit into your processes. And it will require software development for this to work as well.”

Spackey and the team at AFFOA are excited about this opportunity to help develop the next generation of U.S. manufacturing, to create sustainable U.S. jobs. “Our work is just a piece of the platform for the future,” he says. “It requires a whole lot of people working together—a collaboration of the willing is what will make it work. And it’s already starting to happen.”