Unraveling the Mystery of Modern Knitting

This is the third in a series of articles by Senior Editor Cary Sherburne on technical textiles—how they fit in the industry, why they are important, and interesting new developments. In this installment in the series, Sherburne visits with Fabdesigns, an innovator in knitted technical textiles. The company helped Nike bring the FlyKnit shoe to market and much more.

When Nike debuted the Flyknit Racer running shoe at the London Olympics in 2012, it was the end result of several years of effort. For nine years, Nike had been pitching the concept to various groups for five different pieces to be sewn into a shoe, with no takers. In 2008, Stoll, a German manufacturer of knitting machines, introduced Nike to Bruce and Connie Huffa, founders of L.A.-based Fabdesigns. The couple are both textile engineers who met while working for Stoll in California. 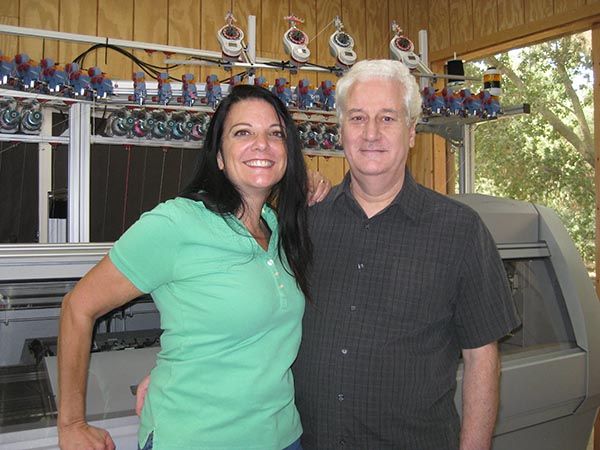 “When we looked at the concept,” Connie explains, “our first question was, ‘Why don’t you make it all in one piece?” That intrigued Nike and launched what was supposed to be a three-month project to prove the concept. “Using Bruce’s foot as the model,” she adds, “we used the machines we had on-site to produce a proof of concept for a single-piece 3D shoe upper in two weeks. It wasn’t salable, but it proved the concept. Nike then installed its own Stoll knitting machine based on the proof-of-concept and produced 14 different salable prototypes.” She notes that Nike is a company that likes to have things planned in advance, and instead of rushing to market with this innovative concept, Nike held out for the London Olympics, where Usain Bolt wore them, and Nike had 50,000 pairs of shoes ready for sale. 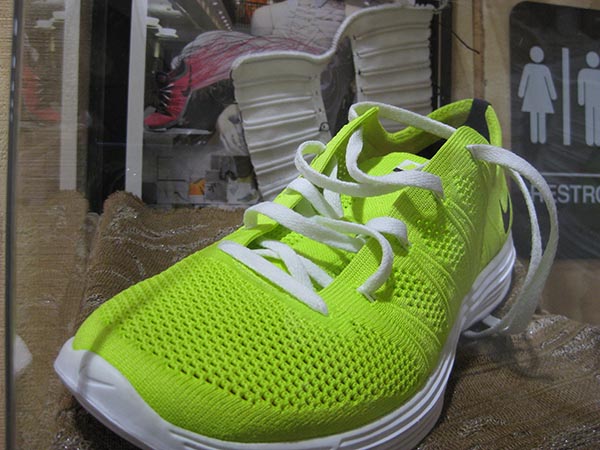 This isn’t the first innovation the couple has helped bring to market since they founded their company in 1988. Both entered the knitting industry in the late 1970s and early 1980s when computers were starting to be used with knitting machines, replacing mechanical knitting machines whose capabilities were limited. “When I worked for Van Heusen Somerset Knitting Mills in Philadelphia back then,” Connie recalls, “everything was very mechanical, and they thought computers were a fad. ‘Give it to the girl,’ they said, and I jumped at the chance. I had been working on computers since high school, and I wanted to learn.” At the time, there were virtually no women in the knitting industry.

Analog-to-Digital in the World of Knitting

The factory where she worked was a showcase for Japanese knitting machine manufacturer Shima Seiki, and the company had introduced computers to drive their knitting machines. “Being able to program was terrific,” Connie said. “And I didn’t have to be strong or deal with the heavy, dirty work the manual set-up required. With the computer, I could do in a couple hours what took the guys two days to do manually. Plus I could make more complex designs, and even do entire body graphs so you didn’t have any repeats in the entire garment.” Connie states that computers helped women enter the industry.

Ultimately, Connie joined Bruce at Stoll’s new West Coast operation in the mid-80s. By the end of the decade, they had founded Fabdesign and had clients in L.A. and around the country who took advantage of their innovative work. “At that time,” Connie says, “Stoll had an Ethernet system that allowed you to connect up to 128 knitting machines to a single computer, and they also had a graphic tablet for creating designs as well as an Apple IIe-based CAD system. I would write programs that were so complicated they wouldn’t fit on a 5-1/2-inch floppy disk.”

With all the current talk about Industry 4.0, Connie believes Fabdesigns was doing a lot of that in the late 1980s with computer-enabled capabilities. “Later,” she says, “Shima, Steiger, and others were able to leverage the computing systems to produce reports to track why machines stopped, whether it was a yarn or needle break or a take-down issue, and how many times it stopped, something we take for granted today.”

By 1990, Fabdesigns had moved from Apple to a Silicon Graphics multi-tasking computer system and had built automation software. “You would draw the pictures,” Connie says, “and with a few manipulations of the type of fabric you were knitting, the software wrote its own control system to run the machine. For the knitting industry, this was the first foray into WYSIWYG software for knitting.”

The industry saw some dramatic changes following China becoming a member of the World Trade Organization at the end of 2001. “This presented a lot of challenges for knitting machine manufacturers,” Connie explains. “They had to cross the language barrier, plus people in China didn’t know how to knit, so they needed even better WYSIWYG to enable people to make what they saw. Both Stoll and Shima were selling 10,000 knitting machines per year in China.”

Unlike the rest of the computer industry, which was moving along at the pace defined by Moore’s Law, knitting machine manufacturers moved more slowly. “By the time they would tweak their computing systems,” Connie says, “we often couldn’t find the printer and scanner elements they specified because they were already obsolete.”

While both Connie and Bruce had worked with Stoll, Connie points out that their allegiance was not to the machine manufacturers, but rather to the needs of their customers. The slow pace of machine manufacturers, and the fast pace of demand for innovation in the market, opened up significant growth opportunities for the pair. “But we still use Stoll for most things,” she says. “Because we do technical textiles, we believe we need the Stoll equipment because of its high speed, the gap of the needle bed, and several other features that we feel makes it more precise. Ninety-eight percent of knitting machines are sold for sweaters and apparel. But when we have to make things precise, such as knitting to shape and making sure shoes are a consistent size—a 5mm variation moves the shoe up a size!—you need to be consistent, and each machine has to knit exactly like the others. Ensuring that consistency is one of the skills we have that is valuable in the technical textiles market. FlyKnit is a good example—Stoll was the only manufacturer that was willing to work with us to modify their equipment, and even then, we had to build some of the parts and create software that made it possible. And when you consider medical products, extreme precision is also required.” 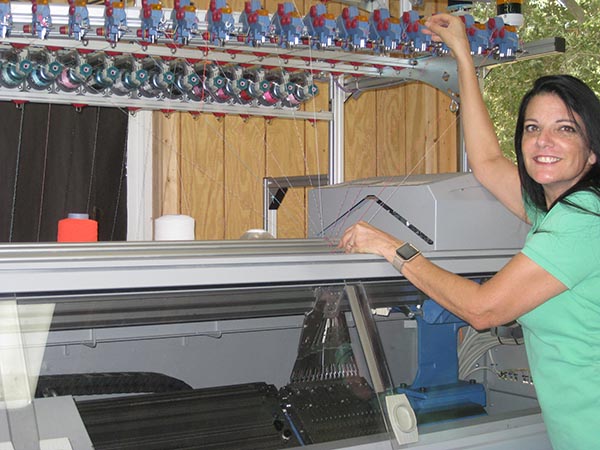 Connie points out that Fabdesign’s waste section typically saves two minutes per shoe, and their customized software saves even more time per shoe than the standard WYSIWYG software provided by the knitting machine manufacturers. “That’s a lot of time and money when you are dealing with 100,000 pairs of shoes. You can save a lot of space, electricity, and material, and people need to buy fewer machines.”

Knitted technical textiles may also be an integrated combination of multiple materials and have different facets. For example, in automotive, you might have a top panel, a center panel, and a bolster. “We are knitting in all those different dimensions for a 3D effect with no waste,” Connie says. “We are able to create these elements consistently and ensure exact manufacturing each time. Without that, you would have to resort to sewing and cutting where you are at the mercy of human error and you have to throw away a lot of material. We can do all these things in 3D, where you have padding, rigid areas, and stretch areas all in the same panel. The knitting machine is like a robot: it makes exactly the same thing every time.” 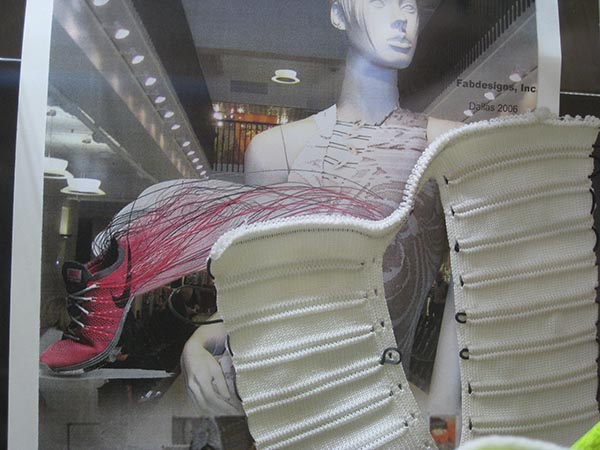 Connie takes the discussion to a new level with 4D and 5D knitting. “That’s where you have a functional element you are actually embedding, such as heating elements, fiber optics, or something like that. And 5D is when you are creating an interactive fabric—putting in sensors that perform a specific function. For example, at a recent show we demonstrated a fabric with integrated nickel titanium alloy that changed shape under specific circumstances. At a certain temperature, it formed into a box; at another temperature, it flattened out. These are technical textiles that interact with the environment and can do things in places people can’t go, like space.”

The company also demonstrated a medical product at APEX in February that had the same nickel titanium alloy embedded into a garment. Connie explains, “If you run current through, it causes the garment to shrink or expand. It was a garment designed for autistic children. Often they need to feel held, so they can just push a button and the garment gives them a hug.”

Other 5D possibilities Connie mentioned included using thermochromatic ink to cause color to change with temperature, reflective materials for outdoors, or even glow-in-the-dark garments if you are going to be someplace with UV light. She projects that the next generation of interactive fabrics will be used for delivering medicines based on interactive sensors in the garment itself.

“In 2013, we participated in a competition sponsored by Nike, NASA, NEID,and the U.S. State Department where we created a laceration-proof fabric for first responders. Also, a taser couldn’t be used on it—it dissipated the energy without harming the person. It was proof that we can embed wires, sensors, and other technology into the fabric using a knitting machine. In the civilian world, these types of fabrics could be used in developing countries to do remote medical diagnostics and biofeedback for patients, relaying the information to a hospital or medical professional in another location.”

As a Fitbit addict, I was interested in Connie’s view on how these technologies would be brought to the wearables market. “In the medical field and the military, they already have strict testing techniques in place that can take anywhere from 18 months to three years to complete and get a product out of clinical trials,” Connie explains. “In the consumer world, especially big sport companies, they want to get products out in three to six months. They want to be able to buy sensors and other elements off the shelf, already tested. They don’t have the in-house expertise and they are not used to the protocols. ASTM and IPC are working to create standards for wearable technology, and those standards will help this market expand. I think you will see some advances in the next year or year and a half as a result of these standards efforts, including a wide variety of materials and processes—film, printed, embroidery, knitted, woven—different ways to embed wires and sensors into fabric.”

Innovative thinkers like Connie and Bruce Huffa are key to driving new advances in technical textiles. We’ll be checking back with them in the future to learn about other exciting new endeavors they become involved in.