Preference and Data and Prices, Oh My!

Prices tell us a lot about how media is changing and what’s ahead. It’s funny – the categories that are growing the most are the ones where prices are dropping. That’s strange. But media preference surveys can be misleading because they can assure media producers of the love of the marketplace, and divert their strategic attention to competitors impinging on that affection. What does Mary Meeker know? A trade association executive says she’s biased. That’s okay. Dr. Joe has different data.

Some recent online exchanges involving publishing guru BoSacks and the head of the MPA and the USPS via secretive blogger “D. Eadward Tree” sent me digging into economic data.

The first chart shows price trends for a selected media compared to the Consumer Price Index (the thick red line); anything that is above it is at prices higher than the general inflation rate, and anything below it is less than the inflation rate, and is therefore cheaper. The data begin with January 2010 as the base of 100. That means a value of 110 is a 10% increase and 90 is a 10% decrease since then.

The basic trends are not surprising, everyone knows the direction, but not necessarily the extent. Postal Service prices are higher than general inflation, television advertising prices are erratic but are generally higher. The CPI shows the overall level of price changes for all goods consumers buy. Advertising agency fees lag inflation (which means they are cheaper), printing prices seriously lag inflation (which means printing is cheaper yet), but nothing compared to the dramatic declines in prices of cellular and wireless services and Internet advertising. 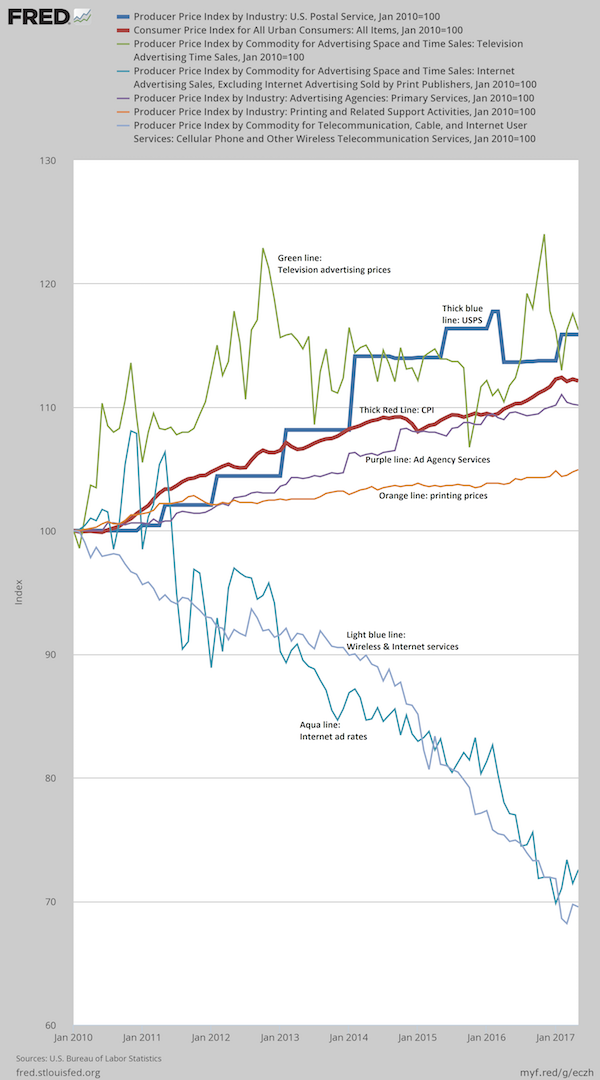 Ad agencies now justify themselves by saving money for their clients, not just stimulating sales, through lower prices for media and smarter use. That was never their reputation, especially in the legendary Mad Men days, where budgets seemed endless and were excuses for shenanigans of all kinds, and affirmed John Wanamaker’s famous comment about half of advertising budgets being wasted but not knowing which half. Advertising has changed, itself threatened by digital media, not from its content, but from digital media’s essence being computer files that must be created, delivered, and stored, and therefore measured.

This means that advertising is under great scrutiny, with users demanding better targeting, more personalization, more non-advertising media (like content marketing which does not require the buying of space or broadcast time), the feedback and actionability of analytics. Much of those analytics is passive and automatic nowadays, and can be tracked on a real-time basis; you just need to be smart and insightful enough to do it well. And that’s why agencies still exist, for that smart and insightful part. Today’s Don Draper is a marketing automation geek.

Ad agency revenues are rising again, but the tools they use are getting cheaper and cheaper. That keeps their fees down so they have to work harder for revenues. They have new competitors, too. It’s easier than ever to bring agency work in-house with more freelance specialists to support that effort than ever.

It’s a reminder that there all technological changes ultimately reduce costs, or create new markets, or both. Those costs are not always out of pocket costs, but savings in time, elimination of barriers to immediacy and turnaround, transportation costs and time, spoilage, improve feedback, and allow different allocations of resources. Total cost is what is ultimately the most important; the cost of one act affects another, and that ripples throughout organizations.

I’d Prefer Not to Talk About It, but Here Goes...

This is one of the reasons why surveys about media preferences are so misleading. These surveys show you a shiny object (preference) but and assert that preference and behavior are the same; they’re not. It’s behavior that matters. Preferences track the way people believe they used to do things, not new behavior, nor does it indicate future behavior. They do not track frequency, or volume of usage. And when studies report things like “70% still prefer medium A,” that conveniently forgets that until medium B came around, medium A was 100%, and that it was the only choice. Being at 70% is actually loss of almost one-third of the hearts and minds of marketplace, not a reason for celebration. By presenting it that way, the survey makes a particular condition seem better than it is.

Sadly, preference surveys encourage producers of medium A to stick with that medium at a time when they should be using the surveys to show the urgency of being involved in medium B, or better yet, figure out how mediums C and D will affect B and A. Preference surveys say something nice and make the entrenched class readers feel good, but the surveys are not really strategic, tactical, or actionable, and give competitors more time and freedom to encroach on their business.

In a prior column and newsletter I noted new slide deck of Mary Meeker. The release is always greatly anticipated by Silicon Valley, technologists, investors, analysts, and others. If you don’t know her, Wired published a profile of her in 2012. The deck covers new technologies, financial issues, applications, and conditions in the US, Europe, and in key countries like India and China. Those are important because those markets are large and because they leapfrogged landlines and other old technologies because their countries were too poor to use them at that time. That means that unwinding prior technology is not a barriers to them like it is in developed economies. The deck has already had almost 1.6 million downloads on the Slideshare page, but it is also available at on another site. Meeker’s recent presentation is now on YouTube and is worth watching. A TechCrunch article identifies what they consider to be the best slides, each with comments.

A few weeks ago, BoSacks offered comments about it in his newsletter. The comments he received from readers were quite interesting, one of them from the magazine association, MPA, whose president called Meeker’s motives into question. Why? Because she works for venture capitalist Kleiner Perkins! That was, of course, funny of the hilarious kind, because the MPA president publishes data about the magazine business, much of it the preference kind. Meeker has a very long track record with some marvelous observations that tie in the economy, technology, audience data. She is especially good at tying it all together. This is “make you think” stuff, and she doesn’t have to share it with anyone, but she does, and it’s essential.

So that got me into the economic data… and it affirms what Meeker has been saying for over 20 years.

The latest Commerce Department Quarterly Services Survey data include agency and publishing industries. We take their data, adjust it for inflation, and present it in four-quarter moving totals so as to smooth variations between quarters that might occasionally be misleading. This way we’re always looking at annual data. The data for the newspaper industry had fallen so much since the survey started, we had to lower the Y axis to fit it. Agency revenues declined, but are back above $100 billion. 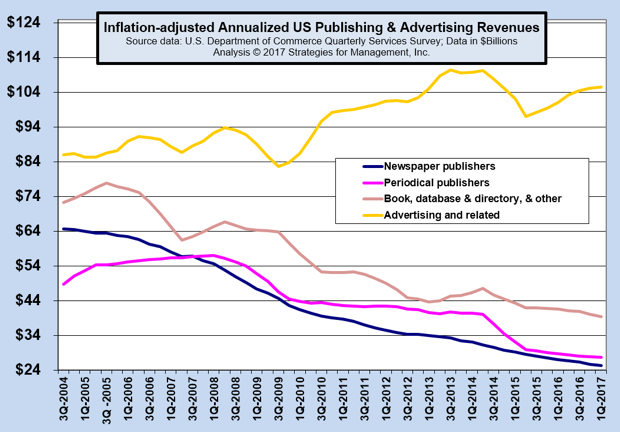 Periodicals, where magazines are, continued its long-term decline. So let’s ask the question: if preference is so good, and the data so strong, then why are revenues going in the opposite direction?

Soon thereafter, the USPS released its data. We like to look at pieces mailed because it can’t be distorted by inflation or other money issues. Note that Q1 for the USPS is fiscal Oct 1-Dec 31 so their Q2 is calendar Q1. The data are not pretty. The chart uses 2000 as its base of 100 -- so periodical pieces is at 55 now, or a 45% drop (100-55). Adjust it for the growth in households in that time, and it’s a drop that’s more than half on a per-household basis. 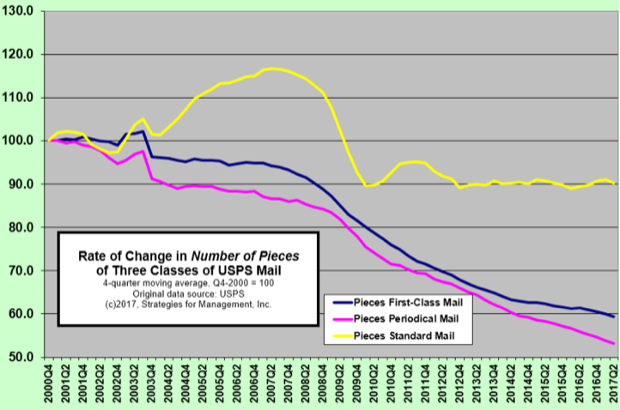 That’s important when you look at standard mail (what has unfortunately been called “junk mail” all these years). Hooray! USPS has been able to keep standard mail flat since 2013 – well, not really. On a per household basis, standard mail has not kept up with the approximately 1% per year growth in households. Everyone knows about the fall of first class mail; no reason to keep piling on. The USPS is known for its preference surveys, too.

These two independent images alone should make anyone confident that what Mary Meeker forecasts should be taken with a high degree of seriousness. These data are objective whether she works in venture capital or not. If anything, it should be treated as reliable insider information.

Until that monopoly is ended, anything else that claims to “fix” the USPS is just tweaks, gimmicks, and illusions. In the process of its breakup, USPS common shares should be handed, as a gift, to its employees and retirees (through its pension plan), with a lock-up period before they can sell those shares. This would give the new independent company a chance to configure and right itself.

The company would no longer have monopoly protection, nor would it be prohibited from entering new marketplaces with new products. The latter is rarely mentioned as one of the reasons for USPS’ problems but it is at the heart of them. By prohibiting it from experimenting and expanding into new products, USPS is unable to engage in innovation that is essential for all organizations to survive. This limitation only mires it in media irrelevance more and more. Its hands are tied. It can’t defend itself in a timely manner by taking basic marketing and managerial actions. It is interesting that no proposal to “save the USPS” includes making it a separate publicly traded company, an implicit admission that it could not survive in a competitive marketplace.

Until then, USPS prices are not reflective of a competitive marketplace… and they continue to be a disincentive to the use of traditional hard copy media that must be overcome with new methods and enhancements.

Lysander Spooner, where are you when we need you? It was his business, the American Letter Mail Company, that had great success with lower prices that led to Congress creating the monopoly protection of the Post Office. Don’t expect a stamp honoring him any time soon.

USPS press releases often include a comment like “The Postal Service receives no tax dollars for operating expenses and relies on the sale of postage, products and services to fund its operations.” We know that’s verbal sleight of hand and we refer readers to a Brookings Institution event that explains a very different picture. The free transcript is at the Brookings site and the discussion starts at the bottom of page 9, explaining the exemptions, subsides, and advantages that are conveniently omitted in the statement. The full 2015 event can be seen at YouTube.