Mobile is a technology that is increasingly disrupting the role of traditional communications. Over the next few weeks, we’ll explore some of the disruptive forces that are expected to impact the market. This week’s article is the first in a two-part series exploring mobile. It covers mobile barcodes and near-field communications (NFCs).

Mobile Has Won… How Will You Respond?

There is a relentless parade of new technologies unfolding on many fronts. Not every emerging technology will alter the business or social landscape—but some truly do have the potential to disrupt the status quo, alter the way people live and work, and rearrange value pools. When making his predictions for 2014, Google CEO Eric Schmidt stated, “The trend has been that mobile was winning, and it has now won.” Mobile is a technology that is disrupting the role of traditional communications.

Service providers must assess the role that they want to play in today’s increasingly mobile world. The statistics speak for themselves. Some of the latest available data points are provided below:

·       In January 2014, Americans used smartphone and tablet apps more than PCs to access the Internet. This was the very first time that this had ever happened.

Over the next two weeks, we will explore how service providers can make mobile technologies work for them.

Print Remains a Cornerstone in the New Media World

Although print is still integral to the marketing mix, it is sharing the spotlight with other media forms in today’s world. InfoTrends’ 2012 study entitled Understanding Vertical Markets: Enterprise Communication Requirements surveyed more than 1,000 enterprises with 500+ employees across 10 vertical markets (automotive, education, financial services, insurance, government, healthcare, hospitality, retail, manufacturing, utilities). Because the enterprise market invests heavily in communication products, it is a market to watch. According to InfoTrends’ research, enterprises spend an average of $26 million annually on communications, with an average of $8 million directed at print.

Figure 1: How is/will your company’s total spending (be) distributed by the following types of communication? 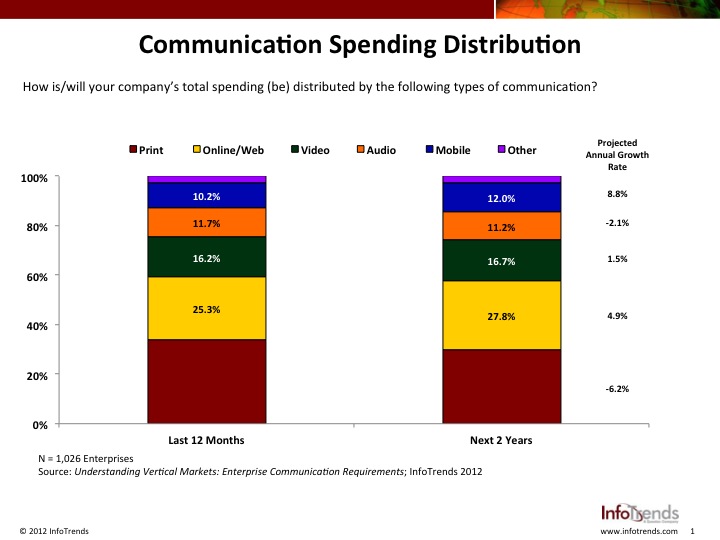 The Changing Role of Print Providers

Figure 2: How frequently do you use a print services vendor to provide these services? 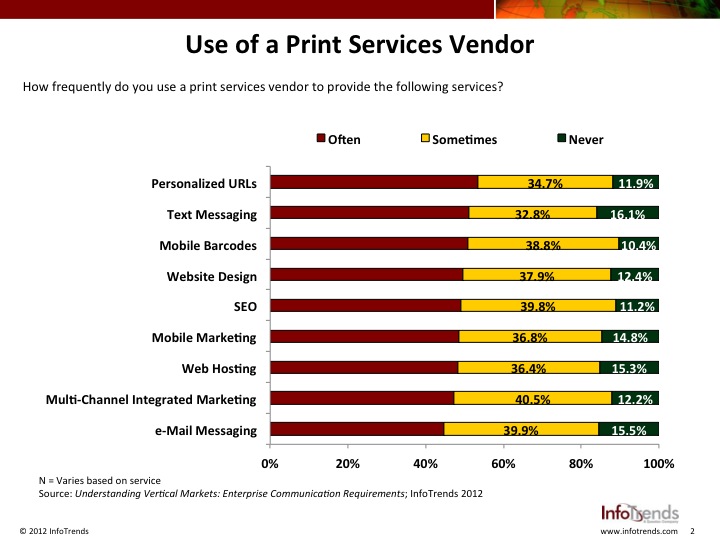 More than 85% of those surveyed were working with print service providers on mobile marketing initiatives. Success in the new media world demands that firms transition their businesses beyond offering only print services to providing cross-media marketing services. Mobile is a critical component of this transition, and service providers must decide what role to play.

How Will You Play to Win?

A number of mobile alternatives are currently taking hold, and service providers must evaluate all the options and alternatives. They also need to assess the skills and infrastructure required for success. Although some of the mobile implementation scenarios are familiar, others are less understood. It’s time to get serious about your role in today’s increasingly mobile world. This week, we will look at mobile barcodes and near-field communications (NFCs). Next week’s article will cover augmented reality.

Printed mobile codes (e.g., QR codes, data matrices, Microsoft Tags) that can be scanned with a smartphone to display additional content have seen rapid adoption in recent years. Their main goal is to provide interactivity to the recipient of a printed piece. This interactivity might involve offering additional product information, providing a link to a video, extending an invitation to complete a survey, or providing a discount coupon. QR codes are the most popular type of mobile code. They are most commonly used in brochures, direct mail, and magazines.

Marketers’ use of mobile barcodes in print products has grown as technology has matured and consumer awareness has increased. The adoption of smartphones, camera phones, and other mobile devices has been increasing, and decoding applications are more readily available. A number of mobile devices are capable of handling rich media application experiences, prompting an even greater interest in engaging with people in a cross-channel fashion. According to InfoTrends’ research, 43% of consumers reported interacting with mobile barcodes in 2013, up from 23% in 2011. Respondents were most commonly using these codes to learn about products/services, take advantage of discounts, and test codes.

Figure 3: Mobile Barcode Use among Consumers 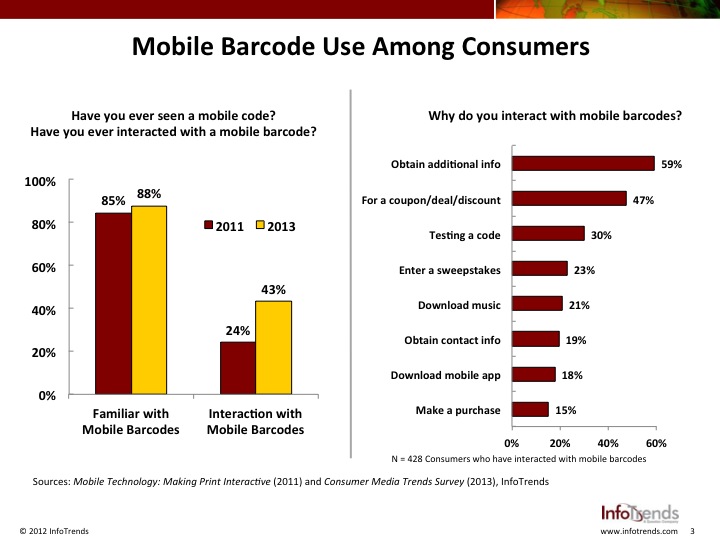 In one of the more novel applications, Heinz Corporation is using QR codes to thank veterans and simultaneously make a donation to the Wounded Warrior Project. When users scan the QR code on a specially designated Heinz Ketchup bottle, they are taken to a page where they can choose one of four different cards. The user can personalize the card with their name, home state, and a personal message of up to 250 characters. Heinz requests an e-mail address (which it promises not to share) so the user can “opt-in” to receive news from Heinz, including product updates, recipes, and special offers. Users can also choose a retired veteran to thank. Participants are then allowed to preview the card and share it on Facebook. Participants feel good about thanking a veteran while Heinz donates money to a worthy cause.

While less prevalent, some marketers are using digital watermarking. Spearheaded by Digimarc and its Discover technology, digital watermarking uses digital signals or visual cues that are invisible to the human senses to prompt an interaction. Digital watermarks can be embedded in images, audio, or even video to enable interaction and engagement that leads to a variety of content types. A unique digital ID can also be applied to each watermark, making it possible to track interaction as well as the effectiveness of a campaign. Consumers typically need a special mobile application to interact with digital watermarks.

Because so many of today’s mobile devices are NFC-enabled, more and more marketers are embracing NFC applications. NFC is now supported by 90% of the leading mobile manufacturers, including Samsung, Nokia, Sony, Blackberry, Google, and HTC. Although Apple's iPhone does not support NFC, there are a variety of third-party accessories available (including streamlined iPhone cases) to bring NFC to the iPhone ecosystem.

According to a number of industry analysts, more than 70% of U.S. consumers will have smartphones by 2014. What’s more, over 50% of these devices will be NFC-enabled. Statistics on NFC-enabled smartphones vary, but the overall consensus is that growth will continue in this area. Here is a compilation of statistics from analyst firms that track shipments of NFC-enabled mobile devices:

·       Frost & Sullivan: NFC will be the most-used solution for mobile payments by 2015, enabling worldwide transactions totaling about $151.7 billion.

The adoption of NFC-enabled phones is increasing rapidly, and this technology is poised to have a huge impact on consumer behavior. In relation to other mobile technologies that help bridge the gap between print and online, NFC technologies offer a key benefit—ease of use. NFC-enabled phones automatically receive the signal from tag, so an app is not required. The Table below provides a comparison of NFC and other interactive print technologies.

An NFC tag is a small passive device (no battery required) that contains a tiny microchip attached to a small loop antenna. When an NFC reader such as a mobile phone scans the tag, it powers up and wirelessly transfers information such as a Web address, text, or a command for an app. The NFC tag can be locked so the data on the tag cannot be changed, or left unlocked so the data can be changed again and again. NFC tags are typically printed stickers or plain stickers, but they can be also enclosed in a wide variety of products, including key fobs, wristbands, and hangtags. Tags need to be “programmed” or “encoded” with an action or Web destination. For firms that are interested in obtaining assistance, some manufacturers will handle the programming while others specialize in adding NFC encoding.

NFCs Are a Key Ingredient in Kraft’s In-Store Marketing

The pilot, which ran for a month, was designed to explore the “tap and engage” experience offered by NFC. The results from the pilot indicated that the overall NFC “tap” engagement level was 12 times higher than the engagement with the QR codes that also appeared on the signs. When NFC was involved, consumers' engagement time at the shelf increased from 5-10 seconds to 48 seconds. Additionally, more than 36% of shoppers who tapped the NFC-enhanced shelf talker ultimately performed an action (e.g., saved a recipe, downloaded the Kraft app, shared with friends).

Mobile Has Won…You Can Win Too!

·       Understand the technologies and how consumers are using them

Marketers and communication decision-makers are pursuing media strategies that unite print and mobile channels (e.g., online, mobile, social, video) to deliver interactive multi-channel communications that drive results. Uniting print and mobile enables print providers to increase the value of print by enhancing its ability to engage and interact with customers. Stay tuned next week for a review of the implications of augmented reality in today’s increasingly mobile world!