T&L (Tape & Label) Graphic Systems Inc has invested in a KODAK FLEXCEL NX System from Miraclon, and within three months are seeing the wide range of benefits it delivers. The investment has not only allowed the Illinois-based converter to gain better pressroom control and savings, but substantially improve the quality of print it can deliver while making the majority of difficult jobs and problems a thing of the past.

One of T&L’s deep rooted philosophies is to not simply invest in equipment just to keep up with the competition, but rather keep and gain competitive advantages. The management team were also seeking to look at options that would optimize their pressroom operations.

Greg Galeles, T&L Graphic Systems’ Plant Purchasing and Art Coordinator, says “the upgrade to KODAK FLEXCEL NX System wasn’t just a continuation of our 10-year relationship with Miraclon. We embarked upon aggressive testing with competitor products for over five months and found that nothing could even come close to what we were achieving with Flexcel NX.”

With the KODAK FLEXCEL NX System installed since October 2019, Greg is more confident than ever that they made the right decision to go with the new system from Miraclon. “We’ve immediately seen a significant reduction, 50%+, in make-ready times as well as set-up materials. For instance, a process & spot color run before using Flexcel NX was taking one hour. Now, it’s down to 30 minutes or less.”

When it comes to color consistency, Greg says the results are “phenomenal. It’s so good, in fact, that we have been able to go to a lower volume anilox and had to cut pigment load in our inks due to greater density delivered on press”.

T&L Graphic Systems’ customers have noticed the better quality and turnaround times too. Steve Danosky, President of T&L Graphic Systems, adds: “Our direct brand customers have expanded the types of jobs they place with us, while printer brokers and converter clients continue to grow – now representing around 80% of our business,” he continues. “We’ve quickly become the go-to supplier for other converters’ problem jobs, that get addressed by our highly skilled production management team. With help of the KODAK FLEXCEL NX System, we deliver exact plates that produce prime quality print unmatched by over 90% of our competitors.

“This also means that it’s not nearly as labor intensive to alter the press as before – we rarely have to change aniloxes or re-adjust impressions and mounting tapes to achieve the quality we’re looking for. It’s not unusual for flexo printers to plan a job, produce the plates and then go back to the drawing board after they’ve tried to run the job on the press. We never have to go make these changes with Flexcel NX.”

Steve concludes: “When suppliers promise results, we’ve come to expect about 70% of that to be true. With Flexcel NX, it’s every bit and more the innovative solution Miraclon promised it would be.” 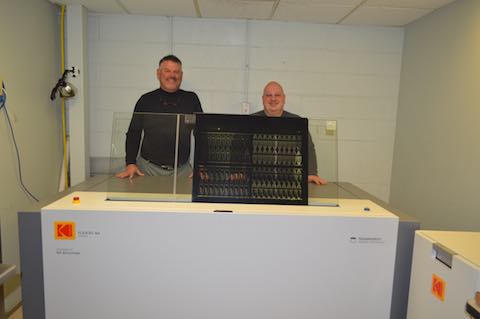