Worzalla Turns to Community for Naming Its New Printing Press

As announced last year, Worzalla is in the process of executing a modernization and expansion plan that will add 50,000 square feet to Worzalla’s manufacturing headquarters, upgrade equipment, and hire additional associates. One of the equipment upgrades was the addition of a new Heidelberg 106 press, which has been delivered and will be fully operational later this Spring. The new printing press will print pages and covers of custom books of varying sizes, shapes, and colors.

The addition of a new press means that Worzalla associates need to be able to differentiate between the two presses when working on orders and communicating with other associates. To help with this, the company has turned to the county’s local schools to name the new press.

“As a company that prints millions of children’s books every year, we thought that a great way to solve the issue of differentiating the two presses was to ask for help from students in our community,” said Jim Fetherston, President and CEO at Worzalla.

Classrooms in grades kindergarten through sixth grade at any Portage County school are invited to submit an entry to the Name That Press Competition. A teacher or parent representing a teacher’s classroom can submit entries to the Name That Press Competition by emailing (1) the classroom’s suggested name for the printing press, (2) the full name of the teacher for the classroom, (3) the teacher’s grade and school, and (4) a brief explanation for the chosen name to NameThatPress@Worzalla.com. Nominations will be accepted through February 28. Finalist entries will be selected by a committee of Worzalla representatives, and three finalists will be chosen based on creativity and relation to children’s literature or books.

Name That Press Competition finalist entries will be announced on Worzalla’s Facebook Page on March 9, where a round of public voting will determine the winning name for the new press. The entry with the most votes at 11:59 p.m. Central Time will be the winner, and the winner will be announced on April 3, 2020. Votes will be determined by the number of “likes” and engagements on the corresponding Facebook post.

The classroom that submitted the winning entry will be awarded a pizza party and a $250 donation for supplies for their classroom. Worzalla will also design a plaque for the new press that will showcase the winning name.

“We look forward to seeing the ideas that local students come up with for naming our new printing press,” said Fetherston. “Get ready to name that press!”

Worzalla currently prints titles from some of the country’s largest book publishers, including Disney Books, Abrams, Simon and Schuster, Hachette, Penguin Random House, HarperCollins, and others. The full modernization plan is expected to be completed in the Spring of 2020. 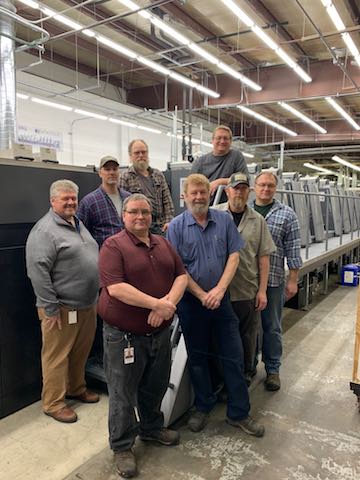