Strong Together: Reginald Lee Invests in Sustainable High-Technology from KHS

Coca-Cola bottler Reginald Lee and KHS have been working together successfully in Argentina for ten years now. Long enough for a solid sense of trust to have been built up and for each company to know the exact strengths and needs of the other.

The bright yellow trucks from the 1940s, on which the Coca-Cola brand swept into Argentina in triumph over 75 years ago, bear witness to a long tradition. Lovingly cared for and polished to a shine, they stand proud in the production shop at Reginald Lee, one of the few independent partners of the Coca-Cola system in South America. In August 1942 the first Coca-Cola bottles, then only familiar to Argentinians from Hollywood movies, rolled into the country on 15 yellow trikes and four trucks like these. Just a few months later Reginald Lee was founded, acting as a national pioneer in the distribution of Coca-Cola.

In 1958 it was the first business to be granted a license to make products by the US beverage producer in Argentina. In Ranelagh in the exurbs of the capital a bottling plant was set up which grew as fast as the area Reginald Lee supplied. To start with, the company concentrated merely on the south of Buenos Aires; today it serves over 4.6 million people in an area measuring around 100,000 square kilometers by supplying 27,000 customers, most of them supermarkets and retailers. This gives Reginald Lee a market share of about 50% in the third-largest metropolitan area in Latin America after Mexico City and São Paulo.

Real family business
Accordingly, the company in Ranelagh is not shy of ist achievements. “We’re very proud to be a real family business,” explains production manager Orlando Diz. “The fact that the owners are here at the plant every day of the week and pitch in with everyone else has a very positive effect on our corporate culture.” The current boss of the approximately 800 people who work here is David Lee, the founder's grandson. He’s also president of the Asociación de Fabricantes Argentinos de Coca-Cola (AFAC), in which Argentina’s other bottlers are organized, among them Coca-Cola FEMSA, Arca Continental and Andina. His words carry weight at the group headquarters in Atlanta.

For Dortmund systems supplier KHS this isn’t the only reason why Reginald Lee is a very special customer. “We’ve had close ties with the company for over ten years now,” says Jorge Oleskow, area sales manager for KHS Argentina. “After we’d sold the bottler their first stretch blow molder and commissioned it, Reginald Lee then successively converted all of its PET lines to KHS technology. We don’t have a situation like this anywhere else in Latin America. This means that Reginald Lee acts as a great reference for us.”

Local service a real plus
The two partners not only enjoy a good relationship regarding the technological side of things; the customer is also extremely pleased with the service KHS provides. “In KHS Argentina we have a powerful local contact to support us,” emphasizes plant manager Juan José Basso. “Compared to the competition, which only has a low local presence, this is of course a real plus. Based on this, during the course of the long-term partnership between our two companies we’ve established an after-sales and service scenario which works perfectly – both regarding the supply of spare parts and maintenance, which can be performed by remote access to our programmable logic controller or PLC.” Reginald Lee cur rently operates four turnkey KHS lines, on which carbonated beverages and hot fill products are processed in non-returnable PET bottles. One of its most recent investments is a hot fill line with a capacity of up to 26,400 bottles per hour. A new production shop was erected on the company premises especially for the system and its adjacent syrup room. The investment amounted to US$16.5 million, including all construction and infrastructure work. “The system’s high degree of automation, simple control and perfect coordination between the machines and the conveyors in particular were what clinched the deal with KHS. This makes our line extremely reliable and considerably reduces the operating effort.”

The biggest challenge of this project was coordinating the construction schedule with that for system installation. The undertaking was all the more complex as during the ongoing process various formats had to be added which were to be processed on the production line. “The system’s flexibility was a major priority for us in view of the huge variety of products we produce,” states the production manager with reference to the company’s sizeable portfolio, which ranges from brands such as Coca-Cola, Fanta and Sprite through Schweppes to Aquarius and Powerade. “Moreover, using as little energy as possible was equally important to us.”

Sustainable process optimization
One significant aspect of Reginald Lee’s corporate vision is sustainability, as Diz is keen to point out. The bottler is consistent in its aim to constantly optimize plant processes to maximize its levels of efficiency, productivity and environmental friendliness. Special attention here is paid to the company’s consumption of water and energy, two areas in which very noticeable savings can be made through the use of its innovative technology.

Diz is thus all the happier that the KHS systems meet his high expectations and in doing so also lower the overall operating costs. “With KHS we feel we’re in good hands and well understood – even above and beyond the sophistication of the technology,” Diz sums up. “This is the advantage of our long-standing and good relationship.”

Faced with the present strained economic situation in Argentina and an extremely volatile market, it may not be easy for Diz to offer any prognoses for the future yet one of his next projects is to reduce the weight and materials of his hot fill PET bottles – a challenge he wishes to master very soon together with KHS. And in doing so to make his business even more sustainable.

Like KHS’ other South American subsidiaries the Argentinian KHS office managed by Jorge Oleskow and Jorge Bosch in Buenos Aires is organized as part of KHS Brazil. It was founded in August 1999 and now employs a total of 14 people, ten of whom work in service. KHS Argentina is responsible for various CSD and beer bottlers – from small craft brewers through family businesses to key accounts. Its activities chiefly center on the PET bottle segment. 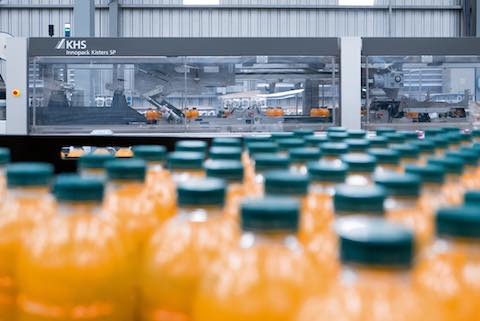