Oosterhout – Now the installation at the Newsquest printing site in Oxford has reached the forecasted results, the British media group, owned by the American company Gannett, is investing again in measurement and control equipment of Q.I. Press Controls. In conjunction with press manufacturer Koenig & Bauer (K&B), automatic cut-off and color-register and closed-loop color- and damp control are being installed at the Glasgow site.

The vision of the future
The Newsquest print facility in Glasgow is currently facing several challenges. The K&B Colora has a considerable scope for growth in terms of the number of unusable copies produced by the press. There are also improvements to be made regarding efficiency in Glasgow. "With the challenging figures in print circulation and an increased focus on costs, it is necessary for us to embrace new technologies in order to reduce costs," says Stuart McLean, Print Centre Manager of the Glasgow site. "Our previous register control system performed poorly and inefficiently. Investing in new automation was necessary."

Proven technology
It has been clear for some time that QIPC was the preferred choice for Newsquest. The Dutch measurement and control systems have been used satisfactorily at various Newsquest branches since the foundation of QIPC. But the performance of the new QIPC installation in Oxford was awaited before a definitive 'go' could be made. "The return on investment calculation we made for the Oxford print site was correct," says Mathijs Baron, Area Sales Manager at QIPC. "And we are pleased that we can now also deliver to Glasgow." Stuart McLean: "QIPC is, in our situation, the best in terms of price/quality and return on investment for press automation."

Cost savings
Press manufacturer K&B supervises the project and ensures the most optimal integration of the measurement and control systems. The mRC-3D system (11 cameras) for cut-off control and IDS-3D (12 cameras) for color and register control are installed on the K&B Colora press. Stuart McLean: "With K&B and QIPC working together, we have high expectations in terms of cost savings. In the first instance, this is about waste savings, faster start-up and more consistency in the printed matter. We are counting on the system to do what it promises."

Professional and efficient
Both parties are excited that the QIPC automation in Glasgow is now finally coming. "QIPC has exceeded expectations in the other Newsquest print facilities," says Stuart McLean. "The system is not yet up and running here, but the company has already proven itself to be a very professional and efficient partner”. Mathijs Baron: "In this way, we are once again expanding our market share in Great Britain. I am sure we will raise the interest of other potential new partners as well." 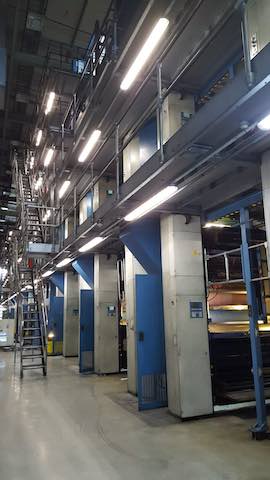