All in the Family

Although Tovar Printing didn't open its doors until 2008, the story of the Texas print shop can be traced back much further. In 1947, Jose Ruiz and his brother, Jesus, opened the family's first print shop, located in El Paso. Five years later, Jose bought his brother's shares and the company was solely his. His three daughters Alicia, Rosario and Elena ran the business until his passing in 1985.

David Tovar, Elena's son, grew up in his grandfather's print shop and became his apprentice at just 8 years old. After his grandfather's passing, David's aunt, Rosario, and her husband continued to run their own print shop in which they opened in 1984. Elena joined them to run the finances while David worked at other various print shops for the next 23 years. Eventually, with years of experience under both of their belts, David Tovar and his wife, Noemi, continued the family tradition by opening their own print shop in 2008, Tovar printing.

With business thriving, it became time for David to invest in a press that was going to reduce make-ready and save on manpower. Kluge's Remanufactured EHD Automatic Platen Press was just what he was looking for.

The EHD Platen Press is known as "the workhorse of the industry" for a reason. With its rugged durability, dependability and ease of operation, the EHD provides years of reliable service. It features speeds up to 3,300 impressions per hour and now comes with delayed delivery, allowing it to accommodate sheets up to 17" x 24.75" with up to 40 square inches of die area.

Tovar Printing's new EHD press was remanufactured at Kluge's facility and updated with Kluge's TRU-TON™ Adjustable Impression feature for faster and easier make-readies. This optional feature allows the impression to be infinitely adjusted with the simple turn of a handle, resulting in decreased production time and costs, and was a key feature for David as he made his decision to purchase a Kluge. According to David, "The pressure adjustment makes all the difference in make-ready."

Also standing out to David was Kluge's service throughout his entire buying process. As a first-time buyer of Kluge, David was very impressed with K.C. Chapin, Kluge salesman and field technician. He said K.C. said "was very, very helpful."

Tovar Printing will use their new press for foil stamping, embossing and die-cutting. For more information about Tovar Printing, visit www.tovarprinting.com. 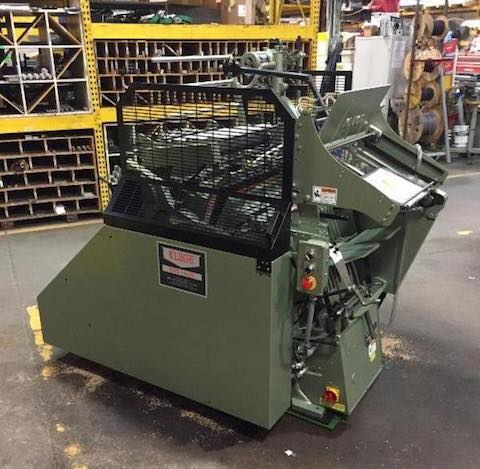