FloriColor is one of the leading producers of professional photography albums in the world. From its premises in Portugal it serves customers in 27 countries around the globe, producing wedding, new born, communion and boudoir albums for some of the world’s leading portrait photographers.

When Fujifilm announced FloriColor as one of the first companies to confirm its investment in the newly launched Jet Press 750S in late 2018, the company cited a combination of environmental benefits, extra speed and the ability to diversify its offering as its reasons for investing.

With installation completed in February 2019, FloriColor is now in a position to confirm whether the reality has lived up to the promise. “We knew the Jet Press 750S was going to help us turn jobs around much faster, and we have not been disappointed,” says CEO Tiago Yu. “Perhaps the best way of illustrating the true extent of this is with a real example from very shortly after the Jet Press was installed. We were preparing to exhibit at the WPPI (Wedding & Portrait Photography International) Expo in Las Vegas, as we do every year, and I asked my team (who were still in training on the Jet Press at the time) to print five sample albums for me to take to the US with me. My instruction was misheard, and the team printed 50 albums instead. Using our silver halide printers, this would have taken around ten hours. On the Jet Press it took 30 minutes. I can’t think of a better way of illustrating the additional speed we have at our disposal than that!”

For a company like FloriColor though, even a speed increase this significant would be of no value without the quality to match. “Our customers are all highly regarded professional photographers,” says Yu. “Their standards are extremely high – we even work with one who charges up to €80,000 to shoot a single wedding. These people are typically sceptical of the ability of any digital press to get close to silver halide levels of quality – until we show them something printed on the Jet Press that is! We have been exploring and investing in digital technology for 20 years, but the Jet Press is the first digital machine that we, and our customers, have been comfortable to use for high end photo album production.”

FloriColor is also a company that takes its environmental responsibilities extremely seriously. “We have a duty to future generations to do everything we can to reduce our environmental impact,” says Yu. “We took steps last year to eliminate almost all the plastic from our packaging, and our Jet Press investment is a major step in reducing the environmental impact of our production processes. The Jet Press uses virtually no chemistry whatsoever, and I don’t think there’s a more eco-friendly alternative available anywhere on the market that offers that level of quality.”

Though FloriColor’s Jet Press investment has, to date, primarily served its existing professional photographer clients, Yu still very much has his sights set on the opportunities the Jet Press provides to diversify and grow into new markets: “We’re immensely proud of the reputation we’ve built up over many years as one of the leading professional photo album printers in the world,” he says. “The Jet Press is only enhancing this reputation. But it also provides the opportunity to grow into other markets. Where we see an especially strong opportunity, given current industry trends, is in the short run luxury catalogue market. With the Jet Press we believe we could, in time, become a major player in this sector.

“Overall, we’ve been delighted with the investment decision,” Yu concludes. “Though it was a big step for us, the fact that we were making the investment with Fujifilm gave us a huge amount of confidence. For 40 years they’ve been providing us with photographic papers and associated chemistry, and with service and support of the highest standard. There’s no company we’d rather be partnering with on this next stage of our journey.”

To learn more about the Jet Press 750S, visit: www.imagineinkjet.com. 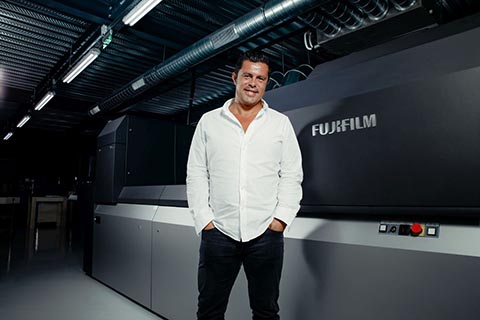