Oosterhout – Automated color control on a waterless Koenig & Bauer (K&B) Cortina press seemed like future music for the time being. But K&B and Q.I. Press Controls (QIPC), together with Coldset Printing Partners, have started a project to integrate the IDS-3D system for automatic color control in the already highly sophisticated press. During the K&B Cortina User Workshop on Wednesday 25 September, QIPC presented the revolutionary system and the first results at the Coldset Printing Partners printing facility in Paal-Beringen, Belgium.

Even higher degree of automation
"Just like an airplane pilot wants his plane to fly on autopilot as much as possible, we try to have our presses to print on autopilot as much as possible as well. Pascal Coenen, Head of Technical Services at Coldset Printing Partners discusses the justified question why someone would like the K&B Cortina, a press that is already highly automated, to work even more autonomously: "We want the level of automation to be as high as possible".

The printer as supervisor
This high degree of automation entails a number of advantages that are very important to Coldset Printing Partners. "The increased consistency in the printed matter is worth a lot to us," says Pascal Coenen. "Think, for example, of small color differences in logos. This is highly undesirable, but more difficult to ensure without automatic color control. In addition, we want to make the work of our printers as pleasant as possible; we really see them as supervisors of the system." Erwin van Rossem, Director of Global Sales & Marketing at QIPC, also notes that the error rate at the KBA Cortina press is smaller, especially because it is such a sophisticated machine. "The smallest changes in variables can have an impact on the printed product. You want to measure such a process as accurately as possible."

Adjusting, fine-tuning and adaption
During the K&B Cortina User Workshop, the system, which is currently being further optimized, was presented. The optimization and integration project is progressing very well, says Pascal Coenen: "The cooperation between the three parties is a real showcase. It is clear that everyone is trying to bring this product onto the market in the best possible way. From the start, the discussions went well, a completely new interface was developed in a short period of time and the installation was completed within two weeks. Now it’s a matter of adjustment, fine-tuning and adaption."

Potential is there
The system is expected to be fully operational by the end of October or early November. "The attendees at our print facility have already been able to see the potential of the system," concludes Pascal Coenen. Erwin van Rossem adds: "I am confident that this development will trigger the enthusiasm of other Cortina users and convince them that automatic color control does have an added value and maximizes the potential of the machine". 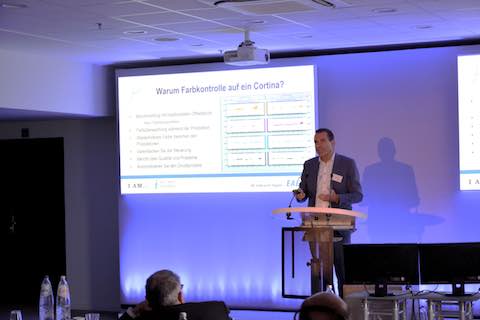