Kinna – For almost two decades, Borås Tidning Tryckeri (BTT) has been a cornerstone in Bold Printing Group, one of the largest printing groups in Nordic countries. The printshop in Viared (west of Borås) was established in 2002 following a joint venture between media groups Bold Printing and Gota Media.

Gota Media is also the owner of the local newspaper Borås Tidning, who used to operate its own printshop in downtown Borås prior the joint venture.

As a result of the ongoing changes in the media landscape in Sweden, Gota Media decided to buy Bold Printing out of BTT and regain ownership of the printing plant, this transaction is ongoing and will be concluded prior end of the year.

The KBA Colora press, installed in 2002, is unique in its design. It consists of three four-high printing towers, one five-high, and one folder. The five-high was not part of the original press order but at the time the press was manufactured in Würzburg, BTT secured another print contract requiring 80 pages and needed one additional web, the result was extending one four-high to a five-high.

The press automation was typical for this time, a solution called “Leittechnik” that is a mix of KBA on-press automation and EAE´s section controller, control desks, planning and reporting. The drive system is a Bosch Rexroth SYNAX system. In 2012 BTT placed the order with DCOS to equip the press with its Closed-loop inspection system, this included the replacement of the EAE ink-preset system. This created a situation where the main automation systems on the press are from four different vendors based four different technology platforms.

For some years BBT has seen the emerging need to retrofit its automation systems to fight obsolescence and to future-proof its operations. The decision was delayed due to the ongoing change in ownership, but with the new owner in place earlier this year, BTT decided to put their plans into action and DCOS was awarded the contract to become the automation partner for all the press automation.

“We have been very pleased with the original systems from KBA, EAE and Bosch Rexroth but for us this was an opportunity to unify our automations systems into one hardware and software platform. The openness and push towards standard non-proprietary components by DCOS were also important for us”, says Måns Källqvist, Production & Technical Manager at BTT. 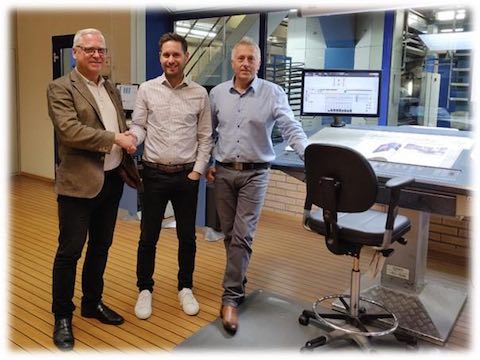 DCOS has developed a drive and control system solution for the “Leittechnik” presses which involves a complete change in technology, the many fieldbus systems in the “Leittechnik” concept will be removed and the new systems will run only over Ethernet. The complete EAE system will be replaced, the obsolete ABB KT98 and KT94 PLC on the press will be replaced by standard I/O systems, and the Bosch Rexroth motion controllers will be removed and integrated in on unified drive and control system by DCOS.

Tommy Johnsson, CEO at BTT; “We invested in DCOS Closed-loop system in 2012 and have been very happy with both system and support. DCOS is a very dynamic and flexible company that well fit our needs for future, we are very pleased to extend and intensify our partnership with them”.

The project preparation phase is ongoing, the retrofit will start on-site beginning of 2020, and last for about 3 months.

Interesting enough, this is the third KBA press within a one-hour drive to undergo a retrofit by DCOS. In 2012 Henreco press choose DCOS to retrofit and extended their KBA Express pres,s and in 2017 V-TAB Landvetter contracted DCOS for the retrofit and extension of their Manroland Colorman press with three stacked KBA Commander Satellites.

“We are honored to win the trust of BTT for yet another project. For many years BTT has been our most frequently used showroom for our Inspection system and a prefect place for our “Leittechnik” retrofit”, says Mattias Andersson, CEO DCOS Sweden AB.