New York, N.Y. – UFlex, one of the largest polymer plastic companies in the world, and Plastic Patrol, an international movement that combines crowdsourcing and community activism to address single-use plastic pollution, recently screened the short documentary ‘The Hudson Project’ at the Core Club in New York City. Along with the film screening, the event highlighted the importance of open and productive conversation around plastic pollution to help identify solutions; included a panel discussion between Anantshree Chaturvedi, Vice Chairman & CEO of FlexFilms International and environmentalist Lizzie Carr, founder of Plastic Patrol; and announced the launch of UFlex Group’s new global initiative, ‘Project Plastic Fix’.

According to Carr, in just the last two years, Plastic Patrol has conducted hundreds of cleanups, reaching thousands of people globally and removing more than 320 ton bags of trash from the natural world. “The Hudson Project” follows her 170-mile paddle boarding expedition to draw attention to plastic pollution in America. Carr is dedicated to using her journeys to capture important data that educates the public on environmental issues and informs industry and government to find solutions to tackling the plastic crisis.

“We are just scratching the surface by litter picking,” Carr said. Through the Plastic Patrol app, trash collected on Plastic Patrol cleanups is documented and categorized. All data is analyzed by partner sciences to inform and develop solutions to the pollution problem. “Coupled with on the ground activism, crowdsourcing through the Plastic Patrol app is a way of understanding the type, location and amount of plastic we are finding. This gives us better knowledge of the trends and patterns we need to address this problem effectively and with the urgency it requires.”

What started as one person has become a global community, said Carr. In fact, the Plastic Patrol app now has more than 250,000 pieces of garbage logged across 68 countries. “Community is at the heart of Plastic Patrol and that’s what we are building, a like-minded community of people that truly care about this issue which ultimately is what will drive change. This is a global problem that requires global change – and this has to come at every level including industry and government, one person can make a difference but it will take systemic change to solve the problem.”

Project Plastic Fix by UFlex: Keeping Plastic in the Economy and Out of the Environment

“Lizzie is trying to eradicate single use plastic from nature – where it isn’t supposed to be, and as a plastics manufacturer, we are trying to achieve the same goal of making our environment plastic free,” said Anantshree Chaturvedi. “We believe that plastic is a problem that can be solved – it’s a global catastrophic risk that we can put behind us, but we have to engineer ourselves out of the problem. Although it’s a challenge, there are avenues, but technology alone isn’t enough. It will take a combination of technology, plastic and people to solve this problem. Corporate choices and citizen behavior are part of the solution.”

To that end, UFlex has launched Project Plastic Fix, a pioneering sustainability initiative designed to clean up plastic waste and convert it into products that have an economic value. In essence, “waste becomes wealth.” UFlex will eradicate plastic waste in four distinct ways through a mix of various methodologies it already practices, such as, Recycling plastic waste into granules further used to make over 10,000 household and industrial products like road dividers, outdoor furniture, dustbins and many more useful articles; Reprocessing plastic waste into fuel through a process called Pyrolysis that emits zero greenhouse emission; Collecting and converting plastic bottle waste into green, up to 100% PCR grade packaging film AsclepiusTM; and Converting plastic waste into 100% biodegradable biomass. UFlex’s Project Plastic Fix is the only project in the world that shall have the technology to make plastic recyclable as well as biodegradable.

Also making Project Plastic Fix unique and different is that waste collection will be done by individuals directly engaged by UFlex, thus eliminating the “middleman” that typically would see the largest benefit from these transactions. Importantly, Project Plastic Fix contributes to poverty alleviation as the person responsible for collecting and depositing the waste, receives the maximum return. To this, Chaturvedi commented, “Waste collection is more about economic value. When we think of waste management as an unimportant thing, it becomes a burden on all those who have to deal with it.”

The initiative is being piloted in India, Poland and Mexico, to begin with. UFlex will be looking at additional locations along the U.S. East Coast and in the United Kingdom later.

“I believe that while plastic cannot be removed from everyday living, it can be used responsibly. We can have a solution to use the plastic that the world has already manufactured and ensure that it gets recycled and reused in the economy, in a variety of ways, without affecting the ecology,” added Chaturvedi. “Project Plastic Fix advocates the message that the problem of plastic is fixable, achievable and there will come a time when we will look back and not believe that this problem ever existed.”

Emphasizing the issue of human behavior that adds to the plastic waste menace, Chaturvedi concluded, “A change in the way the consumer thinks and behaves will make a lot of difference. With Project Plastic Fix, the only requirement from the consumer will be waste sorting, while the rest can still be addressed with UFlex’ four different approaches. Just by making a small little effort of segregating our waste before disposing it, makes it a lot simpler for companies like ours to make sure all plastic waste falls right place. But these changes by consumers need to be made today!” 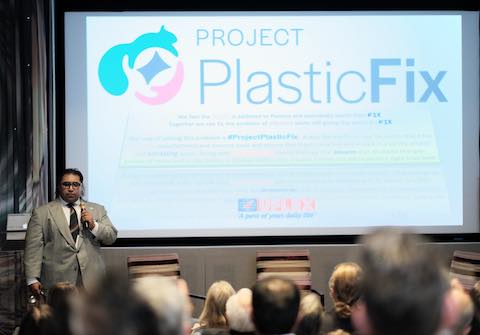