Total Corbion PLA will be exhibiting at K from 16 – 23 October in Dusseldorf, Germany. The company will be co-exhibiting together with parent company Total, and will highlight its Luminy® Poly Lactic Acid (PLA) portfolio and the most recent application innovations. The Luminy® PLA portfolio includes both high heat and standard grades and is used in a wide range of markets, from packaging to durable consumer goods and electronics.

At K 2019, Total Corbion PLA will be showcasing a number of partner applications based on PLA to illustrate the range of possibilities offered by this versatile biopolymer. To showcase the high heat capabilities of PLA, visitors are welcome to enjoy a fresh cup of coffee at the Total Corbion PLA booth (hall 6 / booth E23), served in a PLA thermoformed cup. The cups are available under the naturesse product range by Pacovis. The cups are biobased, made from renewable materials and have a reduced carbon footprint compared to PS cups. In addition to coffee, Clipper tea –in PLA-based tea bags– and Sant’Anna water –in PLA bottles– will also be served to visitors.

PLA-lined paper cups, produced by EcNow Tech under their Earth Smart range, will also be on display. Featuring a PLA lining that can withstand boiling water, they are a sustainable alternative to the traditional PE-lined variety based on oil-based plastics. The cups have a lower carbon footprint and can be industrially composted after use (where local facilities exist). Other high heat PLA applications on display at K 2019 include coffee capsules for Nespresso machines from ATI and tea bags from Nonwoven Network.

Pepsico and Danimer have developed a compostable PLA/PHA-based potato chip packaging for the Chilean market. PLA/PHA-based drinking straws from Danimer are another innovation that help reduce the environmental impact of plastics.

Additional PLA innovations include PLA-coated paper drinking straws from Shanghai Xinxin and PLA single-use shot glasses by Propac. A ‘slate-look’ bioplastic thermoformed black platter for attractive presentation of foods such as cheese, sushi and finger food has been developed by Pack & Proper. PLA pots from organic yoghurt brand Les 2 Vaches (Danone) will be on display, which replace traditional PS yoghurt pots, along with a thermoformed food tray from Cuki Professional. Biobased and industrially compostable PLA trays for strawberries in the UK have been launched by S&A Group and Voges, as well as compostable PLA breakfast cereal packaging by TIPA in the Netherlands.

PLA resins are made from annually renewable resources and are 100% biobased according to EN16785-1, offering a reduced carbon footprint versus many traditional plastics. At the end of its useful life, PLA products can be mechanically or chemically recycled. PLA is also compostable according to EN13432. Compostable applications such as bin liners help to divert organic waste from landfill, offering a significant environmental benefit by both alleviating environmental plastic pollution as well as enabling the capture of valuable nutrients from organic household waste. Similarly, replacing conventional plastics with biodegradable plastics in applications used in the environment offers a responsible end-of-life solution in otherwise difficult to recover/reuse situations (i.e., plastic mulch films, nets, etc.)

Responsible use of resources is of extreme importance to Total Corbion PLA and this includes optimal end-of-life solutions for PLA applications. The company is active in a number of mechanical and chemical recycling projects, including the re-CUP project where, together with Danone, CITEO, Looplife, Veolia and a few other parties, Total Corbion PLA is exploring the options for collecting and recycling PLA yoghurt cups on the French market. Technical experts will be available at K show on the Total Corbion PLA booth for converters and brand owners who wish to discuss the most sustainable end-of-life scenario for their PLA application.

Visit Total Corbion PLA in hall 6, booth E23 to learn how you can make the switch to biobased PLA plastic. 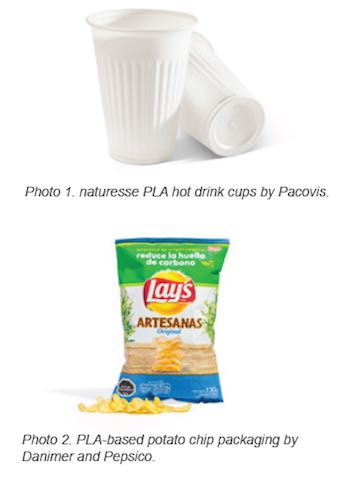