Rolling Meadows, Ill. – After a record-breaking first quarter with snow and cold temperatures throughout many parts of the U.S., the calendar indicates springtime is nearly here. As nature springs back to life, many companies signal the change in seasons by refreshing their marketing campaigns. Such is the case with what MillerCoors is doing with Bear Trucking’s fleet of vehicles in the western United States.

The latest phase of a well-coordinated, multi-year campaign that allows Bear Trucking to rebrand its trailers quickly, more efficiently and at a significant cost savings, is nearing completion. What once took nearly 30 days of taking trucks out of service is now being turned around in one week, courtesy of the Spedian Changeable Graphics System offered by leading fleet services graphics provider Modagrafics. Splashy new artwork promoting the Coors Light brand is being applied to more Bear trailers, ahead of when beer sales begin to tick upwards as people rediscover outdoor activities.

“The banners with the new branding look phenomenal, and the whole fleet of trailers looks great,” exclaimed Jeff Watson, Bear Trucking’s general manager for the last five years. “It’s so much easier and there are no issues replacing the graphics, even on trailers we’ve had for 20 years. It’s much better than what we did previously to represent MillerCoors brands.”

Spedian changeable graphics aces its first test
The changeover of more than 70 trailers began in 2017. MillerCoors has provided Bear Trucking and other distributors with fleet decal kits for the last 15 years. As a dedicated fleet, Bear ships beer from MillerCoors’ Irwindale, California brewery to distributors in several western states, and all of its trailers carry brand marketing messages on the sides and back panels.

Modagrafics already had an established relationship with MillerCoors and was in the process of introducing Spedian, a transformative graphics system with a sizeable economic impact on cost, time and labor savings. No longer would it take $2,000 and two weeks of strenuous effort to sand off old printed decals, and then another $3,000 plus two more weeks to install on every trailer.

“Our procurement team worked with Modagrafics to do a test program with Bear in 2017 before doing the larger scale project last year,” says Jessefer Vazquez, the MillerCoors sales operations coordinator in Southern California who acts as a liaison with Bear Trucking. He oversees nine states in the Pacific region with his boss, sales operations manager Ken Brown.

“It was a rigorous process that began with the corporate team conducting an initial evaluation at Modagrafics’ facilities near Chicago. Then our team completely vetted the new Spedian system in field trials at several locations. We evaluated many different things related to the weather and environment out here.

The test at Bear Trucking passed with flying colors, says Watson. “I wasn’t sure what to expect when we did the testing, but the banner with a Miller Lite Falling Can design has held up very well and still looks good.”

On the high road to greater profitability
Given the tremendous financial burden on brewers like MillerCoors keeping their distributors’ truck fleets updated with the latest logos and branding, the Spedian test results impressed Brown and Vazquez in more ways than one.

“Ken and I realized the cost savings potential,” recalled Vazquez. “We wanted to have an option to remove and replace the fleet graphics at a lower cost for everyone. By switching from traditional decals to using Spedian to replace them, it would save hundreds per trailer. We saw it as a better way to ask fleets like Bear Trucking to keep the trailers fresh with new graphics.”

Sonny Woodall, Bear Trucking’s owner, liked what he heard. Due to the previous cost factors around removing and replacing fleet decals – not to mention keeping them out of service for weeks – the company only changed the graphics on their trailers every three years. He approved the switch to Modagrafics’ Spedian system and phase one was launched last October. That project involved converting 34 trailers at Bear Trucking’s headquarters in San Bernardino.

Trucks back in service in one week
“I met with Sonny the last week in October. He told me I would never have his trucks back on the road in less than two weeks,” chuckled Lawrence Craig, the Spedian program director for Modagrafics. “After our crew finished all 34 trailers in seven days, he thanked me for keeping his trailers in business and his assets on the road generating revenue.”

“Completing the installation of graphics on 34 trailers in one week was amazing. Installing traditional film decals would have taken at least 17 days with a larger three-person crew, so they turned this system around very quickly,” said Vazquez, noting that four brands – Blue Moon, Coors Banquet, Miller Lite and Sol – were featured in phase one.

“There are many advantages to using Spedian. They handle every part of the installation. They also walked us through the process and are real pros; every step was covered. Another thing is you can’t see the framing system. It looks like a traditional decal but it’s so easy to remove. With other changeable graphics systems, you can see the steel frames.”

“It gives us the ability to create graphics for special events, such as a sporting event or a festival. You can roll up your regular graphic and put it into storage. Once you’re done with the special event decal, you can remove and replace it with the one you have in storage.”

During the installation, Modagrafics’ two-person crew was timed at just 18 minutes to complete a full graphics changeover on a trailer. And this Spedian process has earned a hardy vote of approval from Bear Trucking’s GM Watson.

“It’s a great program. The banners look very smooth on the trailers and are very easy to change out. Our drivers like them. It grabs your attention and they look great when you’re driving down the road.”

The completion of phase two will see 34 more trailers on the road with the new Coors Light marketing message. It dovetails with the strategy that Brown, Vazquez and the MillerCoors marketing team have designed from the start.

“We looked at the number of outdated trailers Bear had. Out-of-home advertising is a huge part of our marketing mix, so we have taken the extra step to bring it to our carriers,” says Vazquez. “We’re hoping to pilot this program in the Pacific region and share our success with other MillerCoors regions around the nation. One distributor called it out because it looked so good, he thought Bear Trucking got a whole new fleet. If other distributors start adapting the Spedian system, it will drive down the costs for everybody.” 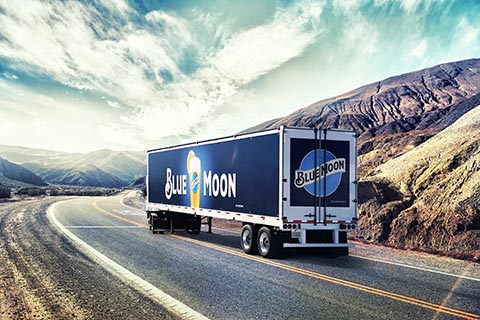