Plymouth, Mich – Trotec will unveil the most recent addition to its Speedy laser series at the ISA show in Las Vegas on April 23-26. Optimized to achieve the highest quality results at even higher speeds, the new Speedy 400 is the fastest and most productive mid-size laser engraver in the industry.

The laser manufacturer will showcase the new Speedy 400 at the ISA show in booth #3853, demonstrating how the new model produces high-quality results even at its maximum engraving speed of 170 inches per second – which is 30 inches per second faster than the previous model. The new model also features a revolutionary new motion planning system called OptiMotion™, which calculates the cutting speed and acceleration based on the geometry in real time. This is standard for larger cutting systems, but it is a true innovation for medium-sized engraving systems.

With the increased power of 250 watts, the Speedy 400 enables higher process speeds, as well as the processing of thicker materials. Other new features include an option to add a MOPA fiber laser source, allowing you to further increase engraving speed, and our patented Sonar Technology™, which comes standard on the new model. This improves results and efficiency by automatically detecting the focus point at each position of the worktable and automatically correcting focus position.

"It's not just the speed that sets this new model apart from the others," says Warren Knipple, President of Trotec Laser Inc. "The Speedy 400 cuts up to six times faster than comparable laser engravers on the market, but even at high working speeds, you can achieve high-quality results."

The new Speedy 400 also sets new standards in terms of ergonomics – without a loss of functionality. Loading and unloading the laser can be done faster and easier than ever, thanks to the new convenient front lid handling.

The new dynamic status display shows the laser status and processing progress directly on the machine. This makes it easy to see at a glance whether the laser is switched on, a job has been completed or stopped, which laser source is activated, and multiple other statuses.

The new Speedy 400 is available with a CO2 laser source, or even two laser sources – CO2 and fiber – in one machine. The patented Flexx Technology™ allows endless application options. Both laser sources can be used in one pass without having to manually change the laser source, lens or focus. The Speedy 400 is a modular and flexible system with a variety of options, such as the multi-functional table concept, various lenses or the JobControl® Vision camera system for precisely fitting Print&Cut applications. This makes it possible to adapt the laser engraver to individual needs at any time. 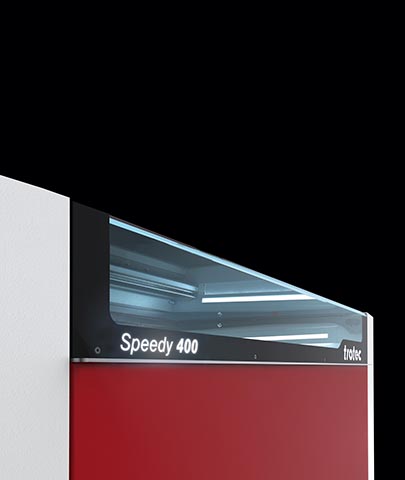