Lehigh Valley, Pa. – Scribbles & Drips specializes in vehicle wrapping, lettering and large format signage—and more recently screen printing of garments, a natural add-on to the custom design shop. William Neyer started the company in his basement in 1998. Soon thereafter he moved into his uncle’s garage but outgrew that space by 2011 when he built a new 1,600 sq ft (147 sq m) facility to house his expanding business.

As Scribbles & Drips’ customer base increased, so did requests for screen printed apparel. “A lot of our customers were interested in screen printing because we already had artwork for their vehicles,” says Neyer. “So we decided to take those existing graphics and put them onto T-shirts.”

Having no prior screen printing experience, Neyer began farming out T-shirt orders. Then, on the recommendation of his cousin, he and his wife attended training courses at Vastex International to learn the screen printing process.

In 2014, Neyer invested in a screen printing shop equipment package, which he set up in his uncle’s garage. His purchase included a V2000HD six-color/four-station press, a RedFlash flash cure unit, an EconoRed I infrared dryer, an E-200-2331 screen exposure unit with a Dri-Vault cabinet, a 36 in. (91 cm) washout booth, and a screen rack that holds up to 24 screens.

The training and equipment package launched Scribbles and Drips into its screen printing venture. Neyer hired a part-time assistant, Doug Fenstermaker, who had previous screen printing experience and has since been promoted to screen print manager.

To prepare screens, Fenstermaker coats them with emulsion and dries them in the Expos-It E2331 ultraviolet screen exposing unit. The machine has six 40 watt fluorescent bulbs and a digital timer for exposure and vacuum control.

“The vacuum draws down quickly and securely, allowing for good screen-to-film contact,” notes Fenstermaker. “Our exposure time is about 10 to 12 minutes per screen—and we coat them a little thicker than normal.”

The exposure unit is mounted to a Dri-Vault VDC-513610 screen drying cabinet capable of drying ten (51 x 36 in. [130 x 91 cm]) screens. Heated air circulates through the pressurized cabin, drying the screens in less than one hour.

Fenstermaker cleans screens with a 36 in. (91 cm) wide washout booth that accommodates a variety of frame sizes. “The booth has a frosted acrylic back panel, which you can backlight to see through the screens more clearly,” he says, “ensuring that everything is washed out of the screens properly.”

Clean screens are stored in the screen rack, where Fenstermaker also dries coated screens if the drying cabinet is full.

“We were printing a lot of simulated process designs, and most of the designs required black, white, and an underbase, which immediately used up three of our colors,” explains Fenstermaker. “That left only three other colors to work with on a six-color press.”

Adding the two print heads allows him to print a greater variety of T-shirt designs in a wider range of colors. Additionally, he can set up several jobs consisting of two or three colors simultaneously.

“The jacket hold-down is handy when you’re printing jackets with an inner liner,” he says. “It keeps the job in registration and helps prevent the jacket from moving and separating from the liner.”

Fenstermaker also favors the double sleeve pallet, especially for large orders, because it allows him to print two sleeves at the same time, halving production time.

Between colors, he activates the foot pedal on the RedFlash flash cure unit with AutoFlash, to automatically rotate the flash head into place over the pallet. After a preset dwell time, the unit returns to home position until the next pallet swings into place.

“Often, shops run into problems because the flash unit remains over the pallet, and the operator forgets to move it,” says Fenstermaker. “With the AutoFlash, you can set the unit’s timer for how long you want it to stay over the pallet so you don’t over-flash the shirts.”

After printing, Fenstermaker places the shirts on the EconoRed conveyor dryer, with its 30 in. (76 cm) wide conveyor belt and a 4,300 watt heater. Both the temperature and heater height are adjustable to maximize heating efficiency.

“If we have an order that’s a combination of T-shirts and sweatshirts, we can easily slow down the belt speed and raise the height of the heater to avoid burning the hoods,” says Fenstermaker, who estimates that it takes about 40 seconds to run a T-shirt through the drying chamber.

At times, he has a backlog of T-shirts coming off the press: “By the time I turn around with another shirt, the first shirt is still on the dryer,” he says. To double his drying capacity, he plans to add a second, modular heating chamber and extending the conveyor belt, which can then be run at twice the speed.

In 2016, Neyer built a 9,000 sq ft (830 sq m) facility for his vehicle wrapping business and moved his screen printing shop from his uncle’s garage to the building formerly used for vehicle wrapping.

Today, screen printing constitutes about 10 percent of his business, but orders have picked up in the last three years, and the shop is poised for expansion. In anticipation, Neyer has a V2000HD four-color/four-station press and a RedFlash R28 flash cure unit on standby to operate alongside the press and flash cure unit already in use.

“The Vastex equipment was money well spent,” says Neyer. “To offer apparel to our clients has been a great adjunct to our vehicle lettering and wraps.”

Screen printing also allows Neyer to service his customers on a more regular basis: “We’ll print T-shirts and tank tops for them in the summer, and then we’ll see them again in the fall for sweatshirts and hoodies,” he says. “On the other hand, when we letter a truck, it could be three to five years before we see the customer again.” 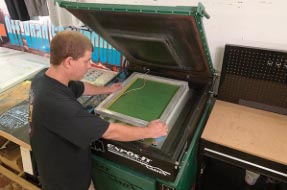