Rolling Meadows, Ill. – United States military members are being duly recognized in more ways than ever, including the trucking industry. The Wreaths Across America program continues to grow each year, and Modagrafics is helping mainstream America recognize deceased veterans with an important event that coincides with the holiday season.

The leading fleet services graphics provider entered into a pilot program to increase awareness of Wreaths Across America’s annual day. About 1.5 million military veterans had wreaths placed on their gravesites at national cemeteries last year. The goal of a trailer graphics program endorsed by Wreaths Across America and adopted by a dozen companies is to improve visibility and raise donation levels so more veterans will be honored with a wreath this year on December 15.

“We saw some amazing graphics and would get calls from trailer operators asking if there was a wrap they could use,” recalled Deborah Sparks, who coordinates corporate development and community relations for the volunteer-based Wreaths Across America. “We don’t but then I saw Craig Neustadt (Business Development Manager) of Modagrafics at the Private Fleet Truck Show. Most people who want to wrap their trailers prefer to do it on a permanent basis. Craig said he could help.”

Neustadt and Michael Loizzo, Modagrafics VP of Sales, came up with a plan to offer six trailer graphic designs. Using the patented Spedian™ Changeable Graphics System to install, the designs include a custom tagline. Even better, Modagrafics is reinvesting in the program by donating a portion of each of the proceeds to Wreaths Across America.

“We have turnkey solutions and Spedian makes trailer graphics a very attractive way for marketers to reach their target audiences,” said Michael Loizzo, Vice President of Sales for Modagrafics. “Traditional wraps are being utilized by those partners that want to bring awareness to the program year-round. It’s a proven success and partnering with Wreaths Across America made sense. I think it’s a great example of cause-based marketing and will improve their overall awareness.”

Sparks said Pinellas Technical College in St. Petersburg, Florida served as Wreath Across America’s prototype for the Modagrafics program. Laura Kingsland and Mary Okeefe worked with Sparks to design three of the graphics being offered by Modagrafics.

“Wreaths Across America is one of the greatest honors you can present for our fallen veterans who have sacrificed so much for our country,” said Kinsgland, a commercial vehicle instructor. “My father and grandfather were in the military. Mary’s father and son were in the military so we both have respect for their service and sacrifices. The graphics on our trailer will never be removed. We are very humbled that we were allowed to create such an important symbol for our fallen veterans, and Modagrafics kept that integrity in the designs.”

The next month leading up to December 15 represents the busiest time of the year for Wreaths Across America. Wreaths can be sponsored year-round and all donations received after November 30 will be applied to next year’s program. Sparks said 45 trailer loads of wreaths will depart from Maine between December 7-11 to four designated staging centers in Arizona, Mississippi, Missouri and Washington State. Volunteers work to the last minute to make sure the wreaths arrive at each cemetery in time for the event.

“The generosity of Modagrafics is incredible,” summed up Sparks, who said they accept every last minute donation since the goal is to honor as many veterans as possible. “They cut costs to make it very affordable for any company to become involved so it’s a win-win for everyone. They heard we had a need and want. Now we have a solution.”

For more information, visit Wreaths Across America’s website at www.wreathsacrossamerica.org and learn more about Modagrafics’s graphic designs at www.modagrafics.com. 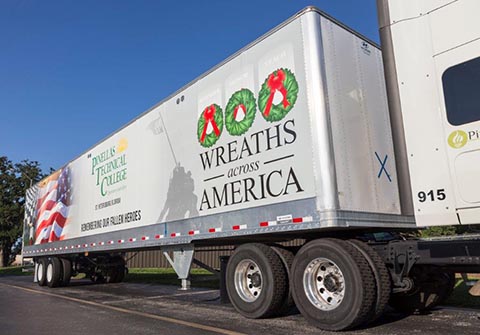