Tokyo, Japan – Epson extends its hearty congratulations to long-term partner Mercedes-AMG Petronas Motorsport Team after the team secured its fifth successive FIA Formula One™ World Constructors' Championship*. The momentous victory was achieved on November 11 after drivers Lewis Hamilton, who won the race, and Valtteri Bottas combined to outpoint their nearest rivals at the Brazil Grand Prix in Sao Paolo.

"Everyone at Epson is delighted to see the Mercedes-AMG Petronas Motorsport Team win this year's championship," said Munenori Ando, executive officer and general administrative manager of Epson's Sales & Marketing Division. "The team's passionate commitment to teamwork, minimizing environmental impact and the constant pursuit of technological advance for the highest level of performance represent values shared with Epson. We are extremely proud that the team used a number of Epson products to support this well-deserved victory."

Epson has supported Mercedes-AMG Petronas Motorsport Team since the 2015 season. As an Official Team Partner, Epson provides its expertise in products including inkjet printers, scanners, 3LCD projectors and smart glasses, with the Epson logo visible on the Mercedes-AMG Petronas Motorsport Team race cars, along with branding on the helmet visors and racesuits of the team's drivers Lewis Hamilton, winner of this year's drivers' championship, and Valtteri Bottas.

* Subject to official confirmation by the FIA of the results of the 2018 FIA Formula One™ World Championship. 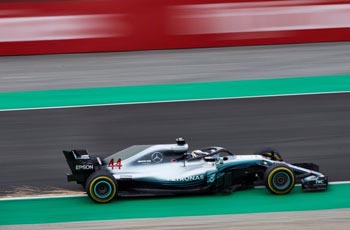