An impressive 150 HD systems and upgrades were ordered since Kornit Digital released the Avalanche HD in the first quarter of 2018. Kornit now globally launches the Storm HD6, allowing mid-size businesses to benefit from high-definition image quality and improved hand feel, as well as a substantial reduction in cost per print.

Jim George, CEO of Kornit's long-term customer Trevco, called its HD investment a no-brainer: “In 2006, we decided to enter direct-to-garment printing and bought our first Kornit. Since then, we’ve expanded to 10 Kornit Avalanche 1000 systems. In February, we beta-tested the HD platform and were amazed at the increase in quality, especially within the red and green color spectrum." George adds that the HD technology also dramatically improved their design resolution and hugely reduced ink usage by approximately 30%. "We immediately realized we had to apply this technology across our entire fleet", George stresses. "The HD platform finally allows us to have ad hoc 'screen print quality' design reproduction – a massive benefit to us, our customers and our licensors."

Digital benefits match current short-run trends
Kornit’s HD print engine, combined with the NeoPigmentTM Rapid ink, also leads to significant reductions in ink consumption and cost per print. The new cost per print levels make the new HD systems an attractive choice for screen printers and digital printers for print runs between one and 500 copies. The Kornit Avalanche HD6 was launched in the first quarter of 2018. Since its commercial release, no less than 150 Avalanche HD systems and upgrades were ordered worldwide, including multi-million orders by several customers.

Event showcases – SGIA sneak preview
The Kornit Storm HD6 was presented at Fespa Berlin as a preview, and Kornit has now confirmed that systems have become globally available through its global distribution network as of October 1, 2018. Demonstrations of the system are planned at SGIA (booth 1815). Many previous versions of the Kornit Storm Hexa are field upgradeable to the new HD versions so also existing users can benefit from the advantages of the NeoPigmentTM Rapid ink.

Omer Kulka, Kornit Digital’s Vice President of Marketing and Product Strategy, comments: “Our HD technology continues to be a success story as the reduced cost per print and the screen-like look and feel meet a market demand that is growing significantly. Introducing this technology to our mid-range product opens up new opportunities for Kornit users.”
Kornit’s state of the art NeoPigment™ meets the highest environmental regulations, including Oeko-Tex Standard 100 Class I, suitable for babies and small children, as well as GOTS V5 pre-approval. Suitable for printing on multiple fabric types, its versatility is unmatched. NeoPigment™ prints have an excellent hand feel, a wide gamut of bright and intense colors, as well as long-term durability and wash-fastness.

Press attending the SGIA show, can schedule a dedicated demo and meeting at booth 1815. Please send a date and timing of your preference to news@pr4u.be to schedule this. Samples will be available for on-site consulting and post-show testing, alongside a press kit. 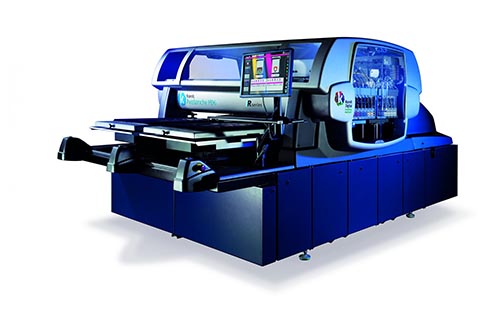