Lancaster, Pa. – Franklin & Marshall College kicked off the opening of its new Shadek Stadium at the 2017 homecoming Diplomats football game. The signs and graphics needed to communicate across the facility and generate a unique fan experience were made possible by FASTSIGNS® of Lancaster, an established sign company owned by local entrepreneur Clint Ehlers.

“Our entire team at FASTSIGNS of Lancaster was proud to be a part of this exciting project and help take the Diplomats athletics programs to the next level,” Ehlers said.

Turner Construction, who oversaw the development, asked FASTSIGNS of Lancaster to design and provide all of the stadium signage, including the 60-foot-tall digital video display and scoreboard on Tom Gilburg Field.

“Our goal for the stadium was to create a comprehensive sign and graphics package that paid tribute to the school’s rich heritage as well as reflect the modern branding and team spirit,” said Angela Allison, FASTSIGNS of Lancaster’s senior visual communications expert who managed the sign project.

To identify and welcome people to the facility, the team at FASTSIGNS of Lancaster mounted large aluminum dimensional letters and logo graphics to the exterior of the building, and provided several branded site signs, directional signs and wall graphics. In addition, images of team players and coaches were displayed on banners and flags, promoting team pride and enhancing the environment.

The next phase of the project needed wayfinding. FASTSIGNS of Lancaster designed and created a combination of branded wayfinding signs including ADA-compliant signs, wall plaques and aluminum signs to identify specific departments, floors, rooms and offices. Outside of the stadium, large dimensional numbers identify seating sections and directional signs help fans find their way.

“Given that the signage would be located in areas of the stadium both inside and outside, we selected materials that would not only hold up in the elements, but also withstand large crowds of students, athletes and visitors for many years,” Allison added.

For the playing field, FASTSIGNS of Lancaster conducted extensive comparison research to find the best digital scoreboard solution to fit the facility’s needs and create a superior game experience. The result: an impressive 60-foot-tall scoreboard that includes a 14’ by 25’ LED digital screen from Daktronics to display video and custom content, a digital score and game clock display, three lightbox signs for sponsor graphics, illuminated channel letters and a complete speaker system.

“One of the final solutions we created for this project was to honor past Franklin & Marshall icons and players,” Allison said. “We provided UV-printed photographs from the school’s history, which were mounted in silver frames to line the stadium’s hallways and rooms, creating a sense of nostalgia for alumni, students and the community.”

FASTSIGNS of Lancaster has received several recognitions for their outstanding work on the Shadek Stadium project. Out of more than 675 independently owned and operated FASTSIGNS locations worldwide, FASTSIGNS of Lancaster received the first place prize in the 2017 Customer Solutions Awards and was named a runner-up for Wide-Format & Signage magazine’s Project of the Year Award. 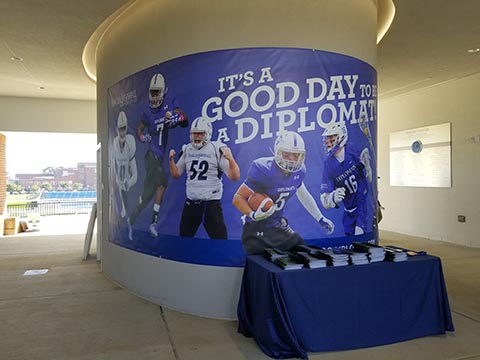