West Caldwell, N.J. – February 27, 2018 – For 56 years, E&M Bindery and Finishing in Clifton, NJ has remained on top as one of the largest and most technically advanced binderies on the East coast. To do so, it requires a dedicated staff, outstanding service and the ability to read the market to remain ahead of the competition. Company president Gary Markovits has accomplished that for the last 25 years.

One of his best recent moves was to solidify the cutting end of the business. Looking to upgrade, Markovits replaced an old paper cutter with a reconditioned 54-inch Polar ED, a Transomat off-loader and Polar jogger as part of a complete system from Colter & Peterson (www.papercutters.com), North America’s largest independent distributor of paper cutters and paper handling systems. Adding the loader, unloader and jogger to the system was simply icing on the cake after using a complete floor plan layout system, exact to the inch.

“We had a cutter with a lot of miles on it. Between the repairs and the maintenance needed to keep it running, the time was right to replace it,” Markovits recalled. “I looked at some new machines that price wise, it was difficult to comprehend and did not make sense to me. I had never bought a machine from Colter & Peterson but when I spoke with Bruce Peterson, he had a machine available and recommended the Polar for the type of work we are doing.”

“The cutting system is meeting our expectations. It is faster that what we had before, and our four cutting operators like how easy it is to use. It is 20 percent faster than the other cutters we have (three 45-inch Polar models) and it is accounting for 10 percent more throughput.”

Firing on all cylinders is a good thing when you are experiencing one of the busiest parts of the year.

“We do a lot of work for financial institutions so it is very busy with end-of-the-year financial reporting binding and finishing,” he said, indicating that his 140 employee company typically runs two shifts, five days a week. “But sometimes we run six days a week and add a third shift when necessary. And sometimes we even go seven days.”

With a 63,000 square-foot operation only 15 miles from Manhattan, E&M Bindery and Finishing (www.embindery.com) attracts its share of East coast commercial printers and brokers from Florida to Maine, plus the Big Apple advertising agencies. They offer mechanical and perfect binding, saddle stitching, specialty finishing (such as foil stamping and extensive die cutting and gluing) and other services, including cutting.

Markovits said the company did over $7 million in sales in 2017 and is projecting to reach $9 million before the end of this year. The bullish approach is driven not only by their client base but the sheer numbers the work commands, often extending into the millions per job. Which makes the recent paper cutter system investment even more important.

“With this cutting system, we can trim up to six inches of sheets at a time,” Markovits said. “The Polar is very versatile and consistent for trimming everything from offset sheets to board. We’ve even used it cut plastic for cover stock and boxes. By expanding our trade bindery, we are now doing work for the Pharma industry – die cutting, tip-in, inkjet and mailing. We have everything anyone needs, all under one roof.” 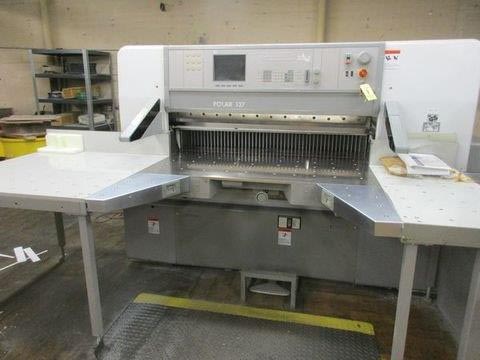