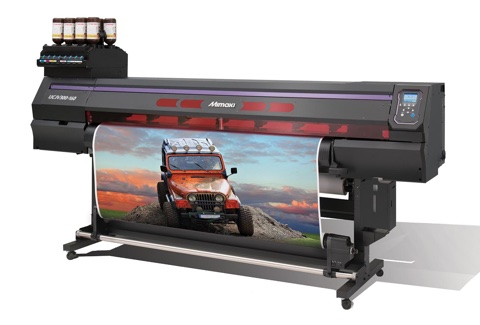 The UCJV Series is available in two models:  the four-color UCJV150-160, and the UCJV300-160 that can accommodate up to seven ink colors. Each can produce a wide variety of print-and-cut applications offered by many signage, commercial and packaging print service providers. UV-LED curing technology enables print service providers to utilize an expanded range of media including many thin film substrates that may be too sensitive for latex or solvent high heat fixation systems.

The integrated cut functionality enables volume production of labels, decals, window clings, floor graphics, POP displays, vehicle markings, packaging and prototypes, and more in a single unit. Additionally, the ability to pre-cut before printing prevents common problems such as film separation and other issues related to post-cutting on thin materials.

Instant-dry for instant use

UCJV Series prints are instantly-cured at even the highest production speeds meaning users can quickly print and immediately move to finished product, unlike other technologies that require slower production to accommodate for dry time or out-gassing. For many jobs, instant-dry, durable, UV printing and cutting can also eliminate the need for additional finishing, enabling print service providers to reduce time to sale while recognizing additional cost savings.

The combination of white and color inks available on the UCJV300-160 model adds value to applications utilizing transparent or semi-opaque films. Compared to alternative inks such as solvent and latex, UV-curable inks deliver greater opacity with less ink consumption per square foot of coverage while maintaining image vibrancy and density. High opacity white ink also enables block out printing within a single print, enabling print service providers to easily and efficiently create window graphics that can be viewed differently from either side, as in a PUSH / PULL door sign. These features ensure higher throughput, reduced waste, and perfectly registered double-sided graphics with lower overhead costs per print.

The UCJV Series printers will ship with updated RasterLink6 Plus software. This new, feature-rich version of the widely used Mimaki RasterLink RIP software includes an ID Cut function to make printing and cutting easier and faster. Along with registration marks, RasterLink6 plus software will include a bar code on the print. The barcode, read by the crop mark sensor on the UCJV printer/cutter, contains cutting and rotation information allowing the UCJV printer/cutter to automate the cutting process. This function is particularly useful when running nested print-cut jobs, as the printer continuously reads the data for both single and ganged jobs.

• Half Cut (HC) – a proprietary function where the backing sheet can be cut leaving behind a small connecting point that can be easily detached when necessary, ensuring contour cut pieces are easier to handle with less waste.

• Over Cut (OC) - makes a cross cut at the start and end positions so the finished piece has sharp edges with no undercut fragments.

• Segment (S) - detects intermediate crop marks in feed direction and enables four-point corrections for each segment for accurate, long-length cutting, even if the image is distorted.

The UCJV Series is expected to be available for customer shipments in the fourth quarter of 2017.