Solon, Ohio – As part of a growth strategy started in 2015, Dynagraphics, based in Decatur, IL, has expanded their commercial print capabilities again by investing in a new RMGT 9 Series offset press. Primarily known as a high-quality, large format and book printing operation, Dynagraphics invested in their first RMGT 7 Series press in 2015. Dynagraphics had always been a healthy company in a stable industrial niche with great repeat customers helping their incremental growth. Since purchasing their first RMGT 7 Series press, Dynagraphics has tripled their business. While digital print has a place in their print operations, investing in offset printing has been the driver of their tremendous growth these past five years.

“We started out as a single shift shop when we acquired Wood Printing, back in 2015,” states Scott Bowers, Vice President, Dynagraphics. “After four years, we started to investigate getting another press since we were working two shifts and were ready to put on a third. We had never grown like that. While our traditional work was with books and booklets, we also did labels. We invested in the RMGT 9 Series press, which is a six-color press with UV and aqueous coater and LED-UV curing. With the new press we are running bigger sheets and, as a result, we are cutting our press runs from 20% to 50%, so we are saving a lot on labor. Having aqueous coating is a big plus for the label work we do. In addition, having LED-UV curing technology allows us to expand into specialty UV coatings on our commercial print work.”

Dynagraphics growth follows a growing trend among commercial printers to increase their investment in offset printing. “We have invested in iGens and other digital printers, and there is a place for that work,” continues Bowers. “At some point the cost of digital becomes expensive. Whether that's 250 or 500 sheets, you can afford to plate a job offset since the make-ready times are so fast and the waste is so small. Also, we run the 9 Series with just one pressman, not two. So pretty quickly, you can take something from the copier to the press and make the economics work in your favor.”

Successful commercial printers are wrestling to find the sweet spot of when to leverage the economic advantage of offset printing versus the short-run advantage of digital. Many printers are finding that the “short-run” tipping point is getting lower and lower with the advanced efficiencies of new LED-UV equipped RMGT offset presses. Much of this has to do with the current pricing model that favors offset over digital, but the true advantage is RMGT’s affordable automation, much lower ongoing costs due to single pressman operation and the instant curing of LED-UV.

“With offset, you don't have that click cost,” explains Bowers. “The five or more cent click costs go on forever. With offset, you're printing sheets for small portions of a penny, especially since you are printing on a bigger sheet, in our case, an 8-up sheet. Once your make-ready is covered, whether that's 10 or 15 minutes, and your plate costs are covered, you can easily figure out the print run number that you definitely don’t want to run on digital. On the new press that numbers a lot lower than we thought.”

Labor is also a consideration for many print operations. “I think some of the guys that have had old iron and had a difficult time training and keeping people have welcomed the digital space,” observes Bowers. “They've accepted the fact that they're not going to be as competitive on some large jobs because of it. You’ve got two different types of people that you need to hire. A digital operator can be somebody who is computer savvy and they can probably handle a copier. That same person is probably not going to run an offset press. You need somebody with a little bit of mechanical ability and troubleshooting skills. But with offset, your costs are so much lower that if you are doing any volume at all, and you just won't be competitive running digital in a lot of different spaces. When you talk about booklets, when you get to 300-400 booklets for sure you want to print offset. Don’t get me wrong, digital has a space, and it's made for really short runs or personalization. I don't think you're ever going to see a day anytime soon where the offset press is not the real money earner in an organization like ours.”

“Successful printers will find a great way to use the two print technologies together and really give your customer outstanding value,” advises Bowers. “For example, you can do personalization of pre-printed shells done on offset. From a printing standpoint, you're not going to have an issue where the fuser on the digital device takes ink or toner off the sheet if the shell is printed offset.” In addition, LED-UV curing means no powder between sheets. Running an offset printed sheet with no powder allows a smooth workflow that allows personalization created in a digital device. “It’s ideal for pre-printed menus. It's ideal for a big company that has multiple locations that maybe wants to buy some of the offset-printed shells in large quantity and then personalize one side of them,” concludes Bowers.

The RMGT 9 Series is the second RMGT press that Dynagraphics has purchased in the last 4 years. The strong work record of their first RMGT, a 7 Series press, made the 9 Series a natural purchase. “We had 5 service calls in 5 years on our first RMGT and we were only down for a day and a half during that whole time. We did look at a few other brands but none of the printers we checked with could match that reliability record, so we moved ahead with another RMGT.”

In spite of the current economic challenges related to the COVID-19 crisis, the offset print operation at Dynagraphics continues to be the most profitable. “We installed the press in December 2019, and we are projecting 30% growth in our print revenue. The RMGT 9 Series press gives us the highest billable rate of any machine in our building. It is the only piece of equipment that we run three full shifts. So far, it consumes enough paper that we're selling at a markup that makes it the most profitable element of our business.”

The economics of Print have meant down pressure on prices for years. “I think you're going to have to compete knowing there's going to be constrained margins,” concludes Bowers. “You're in a far better position to compete if your equipment set is still relevant and you can print jobs easily. That's probably why we've been able to be profitable and compete in the past and lately. Every job is not a wrestling match. When you have the right technology and the right equipment, you can print much, much more effectively… and that's the big difference.”

“Scott and the Team at Dynagraphics have what we call The Unfair Advantage,” states Chris Manley, President of Graphco. “Printers that have an RMGT 9 Series press compete daily with commercial printers running a 40” press that requires two press operators, costs 35% more to plate, costs tremendously more to maintain and requires a much higher debt service. Naturally companies like Dynagraphics can produce their work much more economically on the RMGT 9 Series press. The Unfair Advantage is even more important today than ever and we look forward to the future success and profitability of Dynagraphics.” 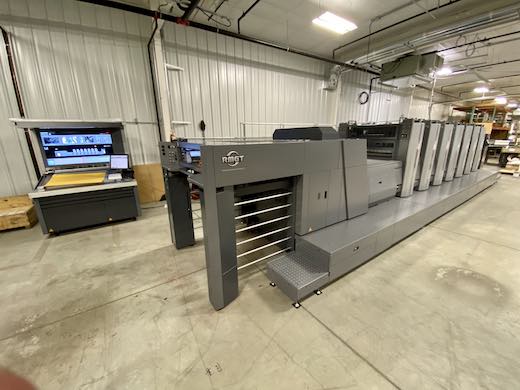 Major congrats to you, Dynagraphics!