Advertising Agency Revenues Have Major Revision Down for 2013 & 2014, but Remain in Long-term Uptrend 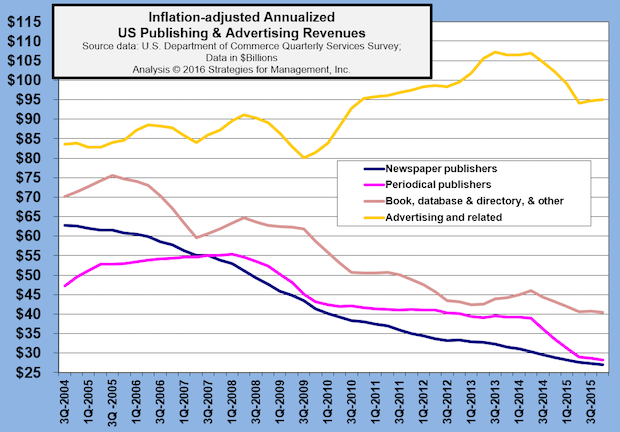 The US Department of Commerce released its latest Quarterly Service Survey last week, and it reduced shipments for the third quarter of 2013 by -$4 billion (whoops – a -15% statistical error).

The data then continued on in normal fashion from there. This changed the trend, however, and advertising agency revenues contracted through 2014. This means they stood by the pattern of industry revenues but not the originally reported amounts. There are many revisions to data coming through now as the Commerce Department prepares the way for its annual revisions to GDP.

Many of these revisions are based on the 2012 Economic Census, which, because of its broader-scale and more detailed methodology, becomes the foundation for all industrial estimates for many years. The revisions to the Quarterly Service Survey did not change the direction of the publishing industries, except to steepen the decline of periodicals in 2014.