Will the Real Crane Please Stand Up? – December 2017 M&A Activity

Crane Currency, the venerable manufacturer of specialty papers used to print paper currencies for more than 50 countries around the globe, is being acquired by Crane Co., the global engineered technology and manufacturing company most commonly known for the ubiquitous bathroom fixtures found in millions of homes, office and factories. Despite the proximity of the two companies (Crane Currency is headquartered in Dalton, Massachusetts and Crane Co. has its home in Stamford, Connecticut), the two companies have, until now, had absolutely nothing in common, except the name. That changes when the former toilet manufacturing company plunks down $800 million to acquire the high-tech paper company that boasts an 18.8% EBITDA of $94 million. This represents a very respectable purchase price in the papermaking business, an industry that is often the subject of bankruptcies and plant closings. The price paid by Crane Co. is 8.5 times EBITDA and 1.6 times Crane Currency’s estimated revenues of approximately $500 million.

Crane Currency, originally named Crane & Co., got its start in 1770, when Stephen Crane established The Liberty Paper Mill, aptly named as he sold some of his first cotton-based papers to Paul Revere. In addition to his famous midnight ride, Paul Revere also printed the American Colonies’ first paper money, on Crane’s paper. In 1844 a descendant of the original Crane developed a method of embedding silk threads in banknote paper as a deterrent to counterfeiting, further establishing the writing paper manufacturer as a source of paper stock for printing paper money. The real turning point came when a scion of the Crane family traveled to Washington, DC in 1879 and won the contract to provide the paper for the new single system of money. As the demand for writing papers declined, another opportunity arose when the country of Sweden decided in 2001 to outsource its currency production. Once again a Crane family member rose to the occasion and landed the contract, which began the company’s global expansion and successful quest for the new anti-counterfeiting measures now used in the new US bills and around the world.

So then, you might ask, exactly who now makes Crane’s Bond, the 100% cotton fiber paper that I have so lovingly used for thirty-plus years as my personal stationery stock (Ivory, Wove). The correct answer would not be the industrial conglomerate Crane Co., nor would it be the recently acquired Crane Currency, maker of money paper, nor would it be Crane & Co., the stationery printing company spun out as a freestanding employee-owned company in 2015. The maker of Crane Paper is now Neenah Paper, a fine printing paper manufacturer that originated in the papermaking mecca of Neenah, Wisconsin, now headquartered in Alpharetta, Georgia. Neenah Paper acquired the manufacturing rights to the Crane brands in 2009. In 2014, in its own effort to diversify its portfolio away from reliance on the commercial printing industry, Neenah Paper acquired none other than Crane & Co.’s technical materials division that specialized in making papers used in filtration applications. Of course, at that time, Crane Currency was just called Crane & Co., since the stationery division had not yet been jettisoned along with the name “Crane Stationery” and apparently also with the rights to use the name “Crane & Co.” Got that?

The acquiring company in the story, Crane Co., was a relative latecomer to the American industrial scene, getting its start in 1855 when Richard T. Crane founded a brass and bell foundry in Chicago, eventually specializing in valves, fittings, and specialty metal castings. The company used its metal casting expertise to develop and manufacture many types of highly engineered products such as valves for steam engines for railroads, steam heating systems, and elevators. Eventually the company began to produce the modern bathroom fixtures that first became popular in the 1920’s. As Crane Co. morphed into a high-tech engineered products company, it manufactured products used in aviation, fluid systems, process controls and space exploration (Crane Co. valves are on the moon). In 1990, as the company began to strategically focus on highly-engineered products, the bathroom fixtures division was sold off to American Standard. Regarding the printing industry, the history of Crane Co. is devoid of any reference to papermaking, except that the company’s pipes and valves, its original product, were most likely used in Crane & Co.’s paper mills (and lavatory facilities as well, we suppose).

It’s known that whooping cranes are one of the few birds that, once paired, are monogamous and mate for the remainder of their lives. Maybe the two Crane companies will from this time and henceforth have a common history.

In a blockbuster odd-couple deal, ModusLink Global Solutions announced the acquisition of direct mail industry-leader IWCO Direct. ModusLink is the successor company to former dot-com darling and dot-com-bust poster child CMGI, and as a result is now the holder of in excess of $2 billion of net operating loss carryforwards. Through a series of acquisitions, ModusLink now operates a money-losing supply-chain fulfillment and logistics business with TTM revenues of $417.8 million as of October, losing $22.5 million with a negative $3.8 million EBITDA in the same period. IWCO Direct, with very similar revenues of $470.6 million, reported net income of $18.9 million and $82.2 million EBITDA (17.5%). The price paid for IWCO Direct, $476 million, was slightly over one-time revenues, and represents a multiple of 5.8 times EBITDA. ModusLink is controlled by Steel Partners Holdings, and has stated their intention to grow IWCO Direct through acquisitions in data and agency services. Those acquisitions will have to be significant to move the needle on this ship and take advantage of the $2 billion loss carryforwards!

In rapid-fire sequence, OSG Billing Services has announced its second acquisition in the transactional printing segment. OSG Billing Services, owned by  Aquiline Capital and now with an expanded $231 million credit facility from Monroe Capital, has acquired Diamond Communication Solutions. This comes less than two months after OSG acquired MicroDynamics from Wafra Partners, and only six months after Aquiline itself had acquired OSG as its platform in the statement printing and e-presentment segment. (For more on our projection that M&A activity will pick up in this segment see Transactional Print: Fertile Ground for Consolidation, The Target Report – October 2014).

ID Images, located in Brunswick, Ohio, announced the acquisition of label and flexible packaging printer Ready Flow Printing. The acquired company, based in Rogers, Arkansas, is the seventh deal for ID images, a diversified label and forms printer selling exclusively through distributor channels. Steven Label, based in Santa Fe Springs, California, acquired Robinson Printing based in nearby Temecula. Robinson has evolved from a general commercial printing company into a specialist printing company primarily serving the pharmaceutical industry with information inserts and packaging.

WestRock, the paperboard, Kraft paper, corrugated manufacturing and packaging printing giant, acquired Plymouth Packaging. The majority of Plymouth’s revenue derives from its “Box on Demand” systems which are machines installed onsite at e-commerce companies and other customers that require corrugated box production in quantities as low as one. The systems pull standard corrugated stock, which is fan-folded on large skids, into a computer-driven machine that will accurately cut and fold boxes of any size that is needed. Used in factories that ship a variety of products in very small quantities as ordered, the system is ideal for e-commerce retailers with a multitude of orders shipped in an on-demand ordering environment. WestRock currently provides one-third of the 60,000 tons of containerboard used by Plymouth annually and presumably will fulfill the balance post-transaction. 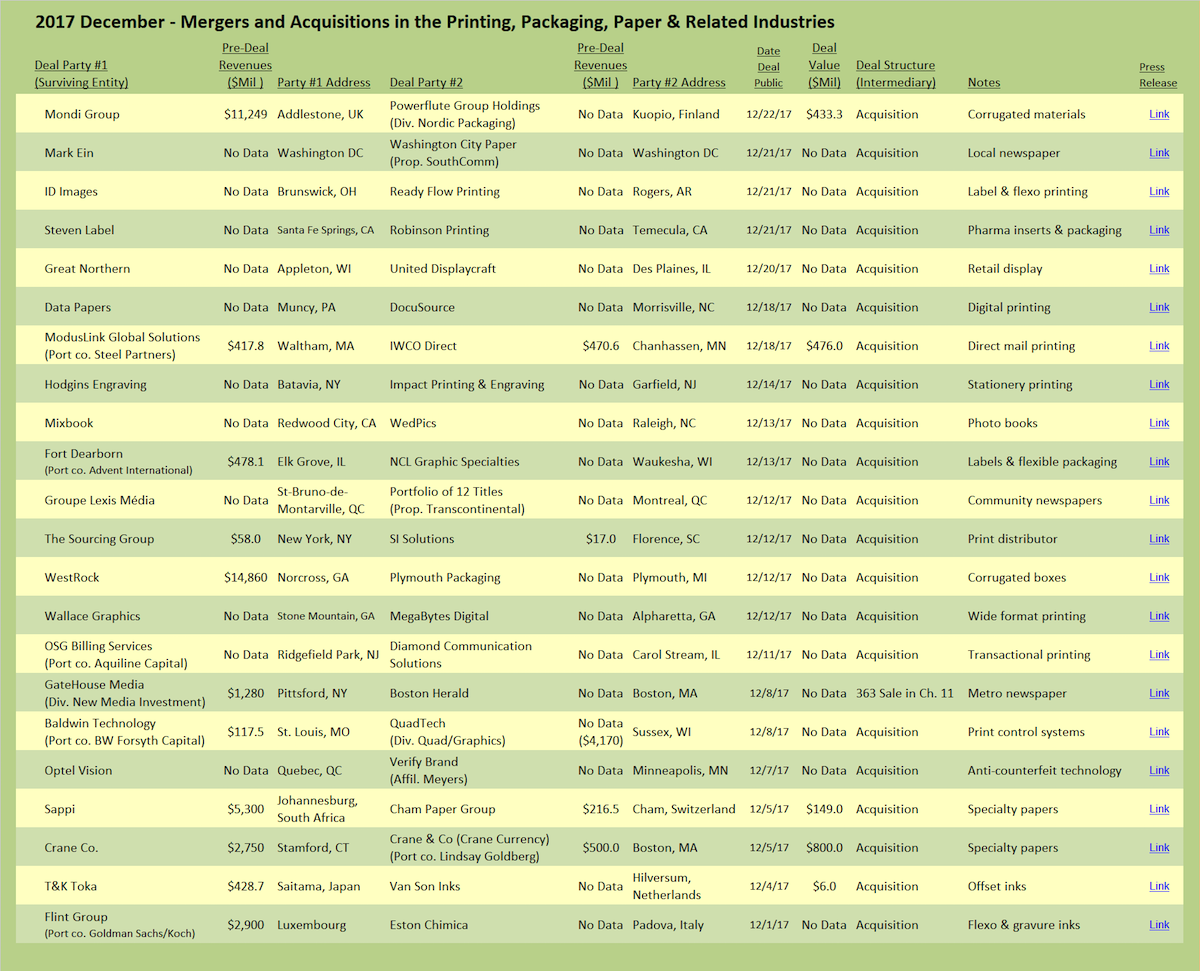