It’s been some time since HP first announced it would be entering the 3D printing market with a production-class printer and it is finally show time. The HP Jet Fusion 3 Printing Solution will be unveiled at RAPID, the largest 3D additive manufacturing conference. As promised, the printer is 10X faster and half the cost of its nearest competitor. 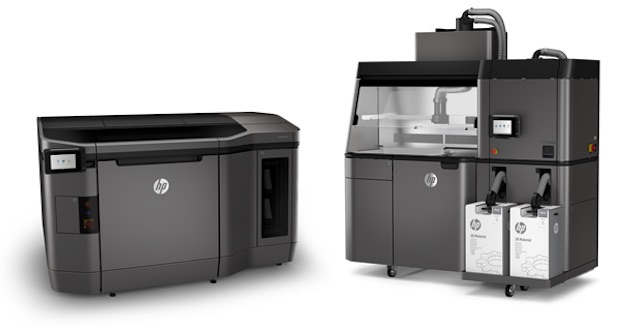 It’s been some time since HP first announced it would be entering the 3D printing market with a production-class printer and it is finally show time. The HP Jet Fusion 3 Printing Solution will be unveiled at RAPID, the largest 3D additive manufacturing conference. As promised, the printer is 10X faster and half the cost of its nearest competitor. Although orders are being taken today, the first printer in the family, the HP Jet Fusion 3D 4200 Printer, designed for prototyping and short-run manufacturing needs, features high productivity to meet same-day demands at the lowest cost per part. It is expected to be priced in the $200,000 range. In 2017, HP plans to make available the Jet Fusion 3200, starting at $130,000, and designed to meet prototyping needs.

And remember HP Sprout? It has a role to play here as well.  According to HP, “Paired with innovation like Sprout by HP, complete digitization of design through production will fundamentally disrupt traditional manufacturing. Digitization and 3D printing can help revitalize regions across the globe that are balancing sustainability with industrial growth. Digitization and 3D printing will reinvent traditional supply chains and create a ‘just in time’ delivery model.” Exciting stuff!

The last I heard, HP does not plan to have Jet Fusion at drupa, choosing rather to focus on shows in the manufacturing space. Take a look at the interview I did with HP’s Steve Nigro last December for more insight into the company’s 3D strategy.

HP has leveraged its thermal inkjet (TIJ) printing expertise in the development of Jet Fusion. The system is able to print parts at the voxel level – a voxel is the 3D equivalent of a 2D pixel – a capability HP claims no one else has and that is key to the breakthrough nature of this printer. This is apparently unique in the 3D printing industry. The system can address over 340 million voxels per second, versus one point at a time. And it is capable of printing in multiple colors. Not only does this allow multi-color parts to be created, it also enables capabilities such as multiple layers of different colors. Why is this of value? Consider the ability to check a part in operation and immediately tell it is worn to a point where it needs replacement simply by seeing a red layer in a black part emerge. Also, parts can be highlighted with color; for example, to indicate where two parts need to be connected in assembly. Parts can also be infused with photoluminescent materials for track-and-trace and anti-counterfitting, and each part can be individually serialized.

Another capability HP will be showing at RAPID is the ability to embed strength gauges, LED indicators low-power Bluetooth and other devices in plastic parts. According to Alex Menino, who briefed the press ahead of the launch, “Imagine what this will do to the Internet of Things, where not only every product is connected, but every part is connected.”

To start the printing process, the 3D build unit is filled with media (powder) and inserted into the printer. The printer builds the part layer by layer, and once it is built, the user removes the build unit from the printer and moves it to the processing center where, in a self-contained way, the part is extracted from the media cake with the waste being recycled.  Ideally, manufacturing will occur with 80% recycled media and 20% new. Operations can have multiple build units for parallel operation. You can download an infographic here [link] that shows the complete workflow.

HP also understands that it cannot go it alone in the world of 3D printing, and thus is building an open ecosystem to support the product. A key element of the ecosystem is material developer partners, such as BASF. HP will be working with a variety of materials suppliers, beginning with plastic materials. The company is already working on the ability to use ceramic and metals, although these materials will not be available at launch and are still in the investigation stage. In addition, HP has engaged hundreds of other partners, including major manufacturers and brand owners, in the development process, with the goal of bringing to market a product that is as functional as possible right out of the chute.

While HP will not be manufacturing media, the printer does use pre-loaded HP cartridges (sound familiar?), so there is obviously a financial model here that benefits HP.

In addition to media, the printer uses two other consumables, a fusing agent and a detailing agent.  The fusing agent is a black substance that absorbs heat and helps fuse the plastic; and the detailing agent helps stop thermal bleed and produces very accurate details. Menino used the example of the ability to print very sharp scissors right out of the printer.

The 3D World According to HP

With the Jet Fusion launch, HP is aiming high – to “drive the next industrial revolution and transform manufacturing. The company claims Jet Fusion will enable new applications without compromise with groundbreaking economics and final part performance.”

And HP is eating its own dogfood here … Menino explained that the company is replacing some milled metal parts on its large format printers with printed plastic parts at less than half the cost and with a 5X weight reduction. “If you can find the right structure,” he says, “many metal parts can be replaced with plastic. If you are milling, it is easier to mill a block of metal than a block of plastic. But if you can print the parts in plastic, it becomes attractive.”

It will be quite interesting to follow the progress of this printer as it begins to come into the market next fall, and the impact it will actually have in the world of prototyping and manufacturing. We’ll be writing more in the future!