While many other trade events are struggling to survive in a dynamically changing environment, Hunkeler Innovationdays, which has taken place in Lucerne, Switzerland, every other year for the past 22 years (11th event this year!) has continued to grow in both size and vitality. Here’s an overview of the 2015 event. 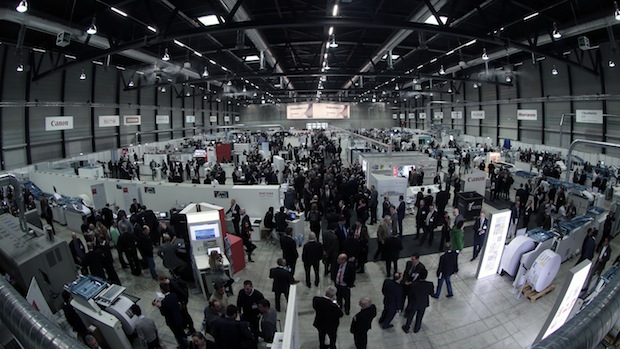 This is the third time I have been able to attend Hunkeler Innovationdays, and this very unique event continues to get bigger and better each time. This year, Hunkeler took advantage of the renovation of the Lucerne Messe to expand its space and make the event even more interactive and comfortable. If you have ever attended Hunkeler Innovationdays, you will understand what a unique event it is. If you haven’t, put it on your calendar for 2017! There were some 5,500 attendees over the near-week-long event.

Don’t take my word for it. Watch this video to hear what Marco Boer of I.T. Strategies has to say about Hunkeler Innovationdays.

In 2015, the event had 40 multi-vendor production lines in the exhibit hall, several co-located events, a number of timely and informative conference sessions, and an expanded dining area that served as the perfect place for meetings, networking, fine coffee and food, and also served as the exhibit hall for software and paper companies.

In the main exhibit hall, all of the key industry players were represented, and collaborated in the true spirit of Swiss neutrality to put together end-to-end, application-specific production lines. This is one of the things that is truly unique about this event. One could imagine that only the Swiss could pull it off. Since it is a Hunkeler event, all of the configurations included some Hunkeler content, of course. But each of the lines also included innovative front-end software, printing and finishing from other Hunkeler partners.

It is also an excellent event for new product announcements, falling between two drupas (at least until drupa moves to a 3-year cycle, if that really is going to happen). Hunkeler itself was showing the DP8, an upgraded dynamic perfing and punching solution that includes a brand-new big-screen user interface that allows operators to drag and drop perfing lines onto a PDF image of the document being processed. The company also introduced a new control system that it says can control the entire production process, including finishing, for more integrated, automated operation. There was also a coater that could be used to process roll substrates pre- or post-print, including the ability to inkjet-optimize papers. And last, but certainly not least, was the quite impressive smart book solution for short-run book production. Take a look at this video, where Hunkeler’s Hans Gut talks about these solutions.

Visit the dedicated Hunkeler Innovationdays mini-site on WhatTheyThink for all of the show news. A sampling of the show highlights is included here. As you can see from the extensive list of Hunkeler partners, there is not space to cover everything here.

Canon made good use of the event by choosing it as the platform for announcing the name of its long-awaited sheet-fed inkjet press, code-named Niagara and now officially christened the Canon Océ VarioPrint i300. The company also made a surprise announcement of two new inkjet presses, the Océ ImageStream 2400, an entry level version of its ImageStream 3500, as well as the ColorStream 3000Z roll-fed press. WhatTheyThink contributor David Zwang reviews these announcements in this article.

HP introduced its new HDNA printhead technology to Hunkeler Innovationdays attendees, with stunning print samples that this High Definition Nozzle Architecture can deliver. It features a 33% speed increase over current printheads with a native resolution of 1200 dpi from 2400 nozzles per inch. Existing presses will be able to be upgraded once the technology becomes available early next year. The company was also running an HP T230 Color Inkjet Press at the show with a live application from Swiss retailer MIGROS. We captured an exciting press-side interview discussion how the MIGROS/TrendCommerce partnership has brought significant advantages to MIGROS direct marketing activities which will be featured on WhatTheyThink soon.

Even though space didn’t permit placing an actual KBA RotaJET at Hunkeler Innovationdays, the company used this event as a platform to spread the word about this interesting entry into the production inkjet space. Printed samples were available showing applications ranging from books to advertising and decorative printing as well as packaging (including corrugated). From what we could see, many attendees took this opportunity to have in-depth discussions with KBA representatives during the show to learn more about how this field-upgradeable press family could help them further grow their businesses.

This was the theme of Kodak’s booth in the exhibit hall which featured the new PROSPER 1000+, a monochrome inkjet press with a compact footprint, improved quality and speeds of up to 1000 fpm and touted as the world’s fastest black & white inkjet press. The company also introduced an offline coater with optimized performance for Kodak inks. Coated rolls can be moved direct to press or into inventory. The company reported that it now has 40 PROSPER presses installed worldwide, meeting the goal set last year by incoming CEO Jeff Clarke. Watch for upcoming videos interviews with Kodak executives for more detail.

Muller Martini had several exciting solutions for show attendees to experience. This included integration of its Presto II Digital saddle stitcher with a Heidelberg Stahlfolder for production of short and medium runs of a wide range of products, as well as a new Vareo perfect binder designed for use with both offset and digital printing of runs as low as one. The company partnered with Hunkeler, Heidelberg, ATS and Polar to show live production of perfect bound brochures at the show.

Ricoh Europe has been using the New Dawn theme over the last several months as it launched its new customer center in Telford (UK), and brought its “New Dawn of Workflow Efficiency” with it to Hunkeler Innovationdays, the first venue outside of Telford to publically show the Ricoh Pro VC60000 production inkjet press, its next-generation offering to this market. The Ricoh booth also featured the newest enhancements to Ricoh ProcessDirector, the backbone of its Critical Communications solutions suite, delivering unified workflow for management of disparate communications channels. Watch for video interviews with Ricoh’s Benoit Chatelard and Mike Herold for more information about these announcements.

Xeikon Bumps Up Speed and Quality

Xeikon chose to use Hunkeler Innovationdays as the launch platform for its new Xeikon 9800 digital press, replacing the 8800 in its document printing line with 1200x3600 dpi printing at a web speed of up to 21.5 m/min (70 fpm) and a duty cycle of up to 10 million pages per month. The press uses Xeikon’s new QA-CD dry toner, designed to deliver consumables cost savings with no compromise in quality. The company also showed the latest samples from its Trillium liquid toner technology, scheduled to be in the market sometime next year. We spoke with CEO Wim Maes on video about the latest Xeikon news. Watch for it!

Xerox introduced brand-new branding and trade dress for its Impika line of production inkjet presses, as well as a new press, the Xerox Rialto 900 inkjet press, presented as the first true collaborative product to come from the merged companies. This roll-to-cut-sheet press has a compact footprint, very nice quality, and is, according to WhatTheyThink contributor David Zwang, “a major departure from the other production inkjet presses we have seen.” Read his review of Xerox Rialto 900 inkjet press for more detail.

During the event, WhatTheyThink captured some great video interviews from both end users and exhibitors that we will be showing over the next several weeks. We know you will be as excited as we were to hear all of their stories.